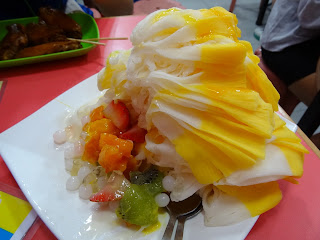 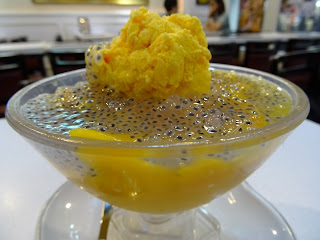 And trust me when I say that this other icy
mango flavored dessert is pretty awesome too! ;b
Decades ago when I lived in Tanzania, I became acquainted with a season of the year in that East African country known as the Mango Rains.  Usually running from around late October to late December, this (relatively) short rainy season was so-called because, as local lore would have it, "the mangos need it" (i.e., the precipitation helps the fruit to ripen).

The way I remember it, this was a time of the year when the pre-monsoon precipitation that came down from the skies would help cool things, including mangos that we'd leave outdoors to be rained upon and consequently naturally chilled to an ideal temperature to consume!  This was something that was very much welcomed; since not every abode that I lived it in Tanzania had a fridge in it, and even those that did were subject to regular electricity rationing (due to electricity being considered a luxury rather than a 'given' in what was then a far poorer country than it is now -- which is still not all that very rich!).

Perhaps because I've come to associate mangos with cool times, I find that I tend to crave them when it gets really hot in Hong Kong.  More specifically, I reckon that my icy mango drinks and desserts intake substantially increases in the summer.  So it's a good measure of how high the temperature has risen in recent days that I've gone and had mango desserts twice in the past three days!

Early on, I tended to make straight for mango dessert specialist Hui Lau Shan when it's gotten so hot that some days, I can't bear to eat anything hot for lunch or dinner, never mind at tea-time!  But in recent years, I've become more adventurous and discovered that many other local dessert places in Hong Kong have their own great mango(-flavored) concoctions!

For example, mango-flavored Taiwanese shaved ice dishes that look beautiful as well as really are refreshingly delicious can be found at Tin Hau Desserts and Yuen Long's iconic Kai Kee Dessert.  Then there was the cold dish consisting of mango ice cream, chunks of the fruit and lots of sago that I had at Noble Dessert Shop which effectively was the second course of a wonderful dinner I had in Cheung Sha Wan that had also included a wonderful bowl of uni tsukemen at the nearby Ebina Tsukemen!

When I think some more of those mango desserts, I get to reckoning that mangos are my favorite fruit for desserts to be made from -- if not my favorite fruits, period.  So it's really quite the pleasure to be in a part of the world once more where these nutritious "superfruits" are pretty readily available -- rather than be something exotic that aren't always to be found in your local supermarket, never mind dessert shop! ;b
Posted by YTSL at 11:59 PM

wow you lived in a lot of places.
Coffee is on