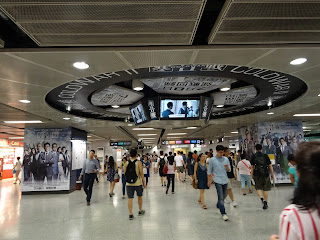 Back in 2012, long-time assistant director Sunny Luk and scriptwriter-turned-helmer Longman Leung made history when the first film they directed (singly as well as together), a star-studded blockbuster crime drama, went on to become that year's highest grossing local film at the Hong Kong box office year.  Cold War also went on to win nine Hong Kong Film Awards (including for Best Film, Best Director, Best Actor (Tony Leung Ka-fai) and Best Screenplay) and you knew it'd be just a matter of time before a sequel was made.

Rather surprisingly, however, it wasn't until four years later that Cold War 2 appeared on Hong Kong cinema screens.  In between these two films, Sunny Luk and Longman Leung also made Helios, another star-studded blockbuster crime drama which saw that which has been regularly touted as "Asia's safest city" (not just "Asia's world city") come under major threat.  And I have to admit that I found myself mixing up some of what went on in this 2015 film with the 2012 movie; with the result that it took me a while to recall and connect the pertinent details in the first Cold War with what takes place early on in Cold War 2, whose proceedings are supposed to follow not long after the final moments of the 2012 film.

Like with the earlier box office mega hit, this follow-up film has two senior police officers struggling for power and control over professional affairs that spill into the realm of the personal.  Early on in Cold War 2, police commissioner Sean Lau (Aaron Kwok) has his wife kidnapped by people who want him to set free the convicted renegade son (Eddie Peng) of Lau's (erstwhile) professional rival, M.B. Lee (Tony Leung Ka Fai, who's just been getting better and better over the years).

After an emotionally compromised Lau botches up the ensuing police operation, the officially retired M.B. Lee is approached by former police commissioner Peter Choi (Chang Kuo Chu) -- who's part of a cabal of powerful plotters, including government officials and lawmakers -- to consider returning to active duty and taking over as police chief.  For his part, Lau smells a rat (or more) at work in the upper echelons of the police force once more -- and determines to hunt down the miscreant(s) even while facing a major battle to save his professional status and reputation.

Given what appears to be a considerably larger budget than for their first feature film, Sunny Luk and Longman Leung pull out the stops in both the sight and sound departments.  It's not just that there are plenty of spectacular action set pieces in this very good-looking movie but there also being lots of expensive looking clothing sported in it by males and females alike, and a musical score that seems to never let up on the eternally swelling bombast.

Almost needless to say, the directorial duo additionally ambitiously up the ante in terms of Cold War 2 having a considerably larger cast along with more complex and convoluted plot than even its already pretty blockbusterish predecessor.  Unfortunately, however, as many a Hong Kong filmmakers doesn't seem to have learnt, big really isn't necessarily better.  And in the case of this particular production, what often results is screen appearances by a number of star names that, at best, are the cinematic equivalent of window dressing (including that of the criminally under-utilized Charlie Yeung) or worse, come across as parodically showy but ultimately inconsequential grandstanding (I'm looking at you, Chow Yun Fat).

Even more problematic for me is that Cold War 2 presupposes that the reputation of the Hong Kong Police Force remains as exalted in 2016 as it was four years ago.  Put another way: as much as the first Cold War gained from its makers' decision to mix in commentary on Hong Kong's socio-political state of affairs 15 years after the 1997 Handover, this new film suffers from the same folks electing to act like the Umbrella Movement didn't take place and/or had little effect on the lowered perceptions of the local police force in its aftermath.

Last but not least, it seems laughable to me given developments in recent years that political intrigues and shennanigans in Hong Kong could be portrayed as being entirely minus the involvement of powerful individuals residing on the other side of the Hong Kong-Mainland China border.  But perhaps local viewers prefer flashy escapist fantasy to dark fiction that cleaves to reality.  Otherwise, how does one account for Cold War 2 having become the highest grossing Chinese language film of all time in Hong Kong?!

I watched it twice and quite like it compared to the first one.

Why did you prefer "Cold War 2" to the first "Cold War"? Do you think it has something to do with your awareness of/reactions to the Umbrella Movement and recent socio-political developments in Hong Kong?