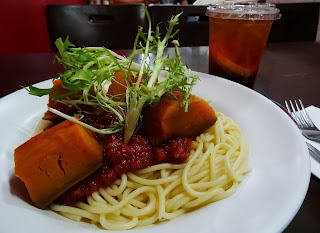 How much do you reckon that this dish
and accompanying drink cost? 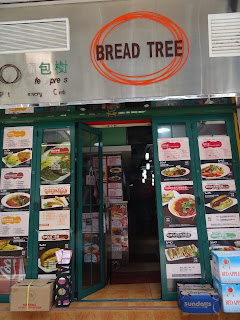 The Wan Chai eatery that I've been going to
for more than nine years now! ;b
If you were to ask many -- possibly even most -- Hong Kongers what their favorite Western cuisine is, chances are that they'll tell you that it's Italian.  But the probability is pretty high too that much of what Hong Kongers look upon as Italian food will not be recognized as such by denizens of that boot-shaped Mediterranean country; what with pizzas found in Hong Kong likely to feature sweet corn and canned tuna toppings and such!
In addition, there's the irony that my favorite "Italian" restaurants in Hong Kong include branches of Pizza Express (a restaurant chain with British origins that's now owned by a Beijing-based company), New York Italian joint Carbone and Sagrantino, a Japanese-owned restaurant offering Tokyo-style Italian cuisine.  And then there's Bread Tree, a distinctly Hong Kong-style budget eatery which was a favorite of pretty much everyone at the company I first worked for in the Big Lychee -- and has remained a favorite of mine long after I stopped working in a part of Hong Kong where Bread Tree makes deliveries to.
When I mentioned to an ex-colleague turned friend a couple of evenings ago that I had gone to Bread Tree for lunch earlier in the day, she laughed and asked me whether I had ordered the dish marked L8 on its menu, and laughed some more when I confirmed that I had indeed done so.  She proceeded to remind me that she and our then boss also would regularly order that dish: which features what's described as a herb tomato meat sauce on the menu but tastes like an addictive bolognese sauce that's sweeter than usual and a choice of pasta (spaghetti, linguine, fusili, etc.), rice or mashed potato, and a second choice of pumpkin, eggplant (aubergine in British English), zucchini (or courgettes in British English) or a fried egg for the topping!
Whereas my friend pretty much always went for the eggplant topping, I tend to opt for either the pumpkin or zucchini -- and also have been known to go for the fried egg every once in a while.  But both of us tend to stick to the spaghetti pasta option -- and agree that that meat sauce is something really special.  To judge by her laughter though, she probably hasn't thought to go there since she left the company.  I, on the other hand, have continued to go there -- and in fact, I often expressly go to Wan Chai to lunch at Bread Tree since I still fairly regularly have cravings for this particular dish!
Its exterior may not look like much; especially as these days, some letters have fallen off from the sign above its entrance.  Actually, its interior doesn't look like much either; being on the cramped and spartan side.  But I find the furnishings comfortable enough, particularly when you go during off-peak hours when you can get a table to yourself (rather than have to daap toi (share a table with people you don't know)).
And then there's the price, which is hard to beat.  Even with (incremental) increases over the years, that dish plus a cold drink (like a glass of iced lemon tea) still costs just HK$41 (~US$5.29); making Bread Tree's L8 option possibly my favorite "Western" lunch deal in the whole of Hong Kong! :b
Posted by YTSL at 11:18 PM

Not strange at all -- I like eggplant too. More than by the way, one of the dishes I miss most from my time in the US is eggplant parmiagiana... :b

If eggplant is concerned, I like it sliced and then steamed, with lots of garlic and a splash of soy sauce, maybe with a little bit of sliced red chili.

I would certainly enjoy a bowl of baked sliced eggplant interlaced with a few kinds of cheeses, like mozzarella and maybe, parmesan or mascarpone. Might like some blue cheese if I want a heavier kick.

I like eggplant a lot of ways, including stuffed with fish paste, deep fried and slathered with hoisin sauce Hong Kong "street food" style... ;)