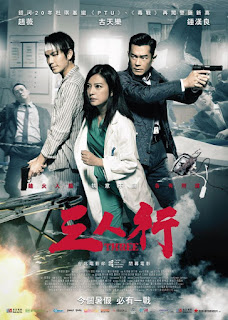 Three has substantial roles for two actors
and one actress


In the early part of this century, then Hong Kong-based filmmaker Peter Chan Ho Sun was involved in two Pan-Asian film anthologies; both of which were horror works with the word "Three" in their title.  So when I first heard of a new Hong Kong-Mainland China co-production whose single word title was Three, I initially assumed that it was a long delayed follow up to Three (2002) and Three... Extremes (2004) before finding out that this particular offering actually was a crime drama-action thriller directed by Johnnie To Kei Fung.


The Milkyway Image supremo's first serious crime film since 2013's Drug War (as opposed to the romantic comedy-crime movie that was Blind Detective, 2014's romantic offering Don't Go Breaking My Heart 2 or last year's intrigue-filled musical Office), Three (2016) largely takes place in a hospital and has its lead actress playing a doctor but there's little doubt that its main focus is on a battle of wits waged between a wound-up police officer and wounded criminal brought to the hospital for medical treatment.


Shot in the head at close range but still conscious and remarkably lucid, Shun (Wallace Chung) is a master criminal whose accomplices are at large and out committing crimes but widely anticipated to try to rescue him and also seek revenge against the cop who put a bullet in him.  Rushed to hospital by a police team nominally headed by Senior Inspector Ho (Luvin Ho) but actually commanded by the more aggressive Chief Inspector Ken (Louis Koo), Shun goes to show that there probably is something really wrong with him when he refuses to be operated on by neurosurgeon Dr. Tong Qian (Vicki Zhao Wei).


Adding to the implausibility of it all is that Shun is then put in an open ward filled with other patients, many of whom have their own stories and color to add to the overall picture.  Among these are a senile old man whose actions help create a sense of chaos (Lo Hoi Pang) and a computer geek who seems physically okay but refuses to leave the hospital (Timmy Hung), who initially appears to be in the frame solely for comic relief.  In addition, there's an embittered young man who blames Dr. Tong for his operation not being an immediate success (Jonathan Wong) and an older patient of the neurosurgeon (Cheung Kwok Keung), whose wife (Tam Yuk Ying) is there at his side; all of whom appear to be around primarily to up the film's pathos quotient.


Those who delight in spotting familiar faces in the cast will get some joy from the likes of Milkyway Image production regulars Lam Suet and Eddie Cheung also making appearances in Three along with other local favorites such as Michael Tse.  At the same time, those who get irritated -- and even downright annoyed -- by the kind of improbable actions, characters and situations that seem able to exist only in the reel (as opposed to real) world will find plenty in this offering that will effectively take them out of the picture and bemoaning this work's high production values being manifested more in visual style than actual substance.


For my part: even though I generally welcome the presence of Vicki Zhao Wei and Lam Suet in a film, I found it hard to watch how stupidly their characters behave; and this especially since one of them is supposed to be a respected surgeon while the other is supposed to be an experienced cop.  Actually, for way too much of Three, the movie's characters were made to behave in ways that were obviously designed to serve an ambitiously -- but overly -- complex story rather than in a manner that gave them the requisite characterizations and dimensions to come across as plausible personalities whose actions are understandable, even if not necessarily agreeable.


On a crew note: Three looks to be the first film in which Johnnie To has a co-action directing credit to go along with his more usual co-producting and sole helming ones.  I've also read that its climactic action set piece took three months to rehearse alone.  Clearly a lot of thought and effort as well as time -- on the part of To along with the other relevant members of the movie's crew along with cast -- was put into that visually pretty breathtaking shoot-out scene.


I just wish that had been so with the rest of this offering too.  Sadly, post-viewing this work, my suspicion is that it wasn't the case; and this seems to be the shared conclusion of a number of other members of the audience, whose critical comments helped ensure that Three had a noticeably shorter run in Hong Kong cinemas than has been the case with most Johnnie To films released since 2000's Needing You....