Not your usual photos taken while riding on the Star Ferry 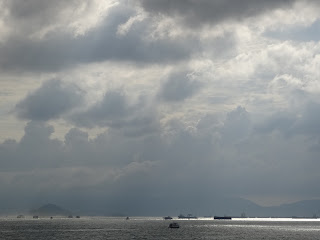 Water and light combined can make a pretty picture
even without a rainbow in sight ;) 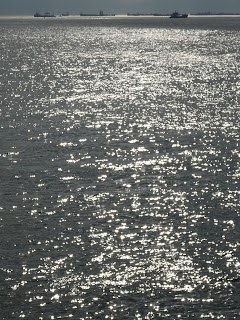 I really do love how the water can look like
it's glittering when light reflects off it :)


Pretty much wherever I go these days, I tend to have a camera in my backpack or an outer pocket of the cargo shorts I like to wear in the summer (rather than the cargo pants I prefer when the temperatures drop).  Believe it or not, this wasn't always so.  In fact, there have been periods of my life -- which I now really do regret -- where there are scant photographic records because I didn't like as well as think to have a camera around.


Thinking back, I reckon things changed quite a bit with the advent of digital cameras.  And my coming to have a blog also made me more inclined to take more photographs, including of everyday scenes which -- sometimes, upon looking back -- actually are pretty interesting; this because I feel that the likelihood has increased of someone out there enjoying seeing my snaps besides just myself!

Along the way, I've found myself not only taking more photos but also experimenting with such as taking pictures from different and unusual angles as well as a variety of subjects.  Thus it was that, while taking the Star Ferry from Wan Chai to Tsim Sha Tsui, I once again couldn't resist snapping some photos during the short but pretty much always enjoyable ride but decided to opt for shots that were less conventional than usual.

For one thing, rather than focus on the views of skyscrapers on the sections of land to the north or south of Victoria Harbour, I opted for shots where the sky met the water instead.  And rather than have the horizon be near the center in the photos, I had it either super high or super low in the picture instead.  And if I may say so myself, I reckon the resulting pictures are pretty cool -- and consequently worth sharing on what I had intended to be a text-light blog post but actually has turned out to still be rather wordy...! ;b
Posted by YTSL at 11:59 PM

I can seriously relate to photos such as these of sea and sky. I used to shoot color slides and prints, but ever since I went digital, I've found myself also accumulating quite a big digital archive. Like you, I've learned to always have my digital compact camera with me, vowing to never miss another memorable shot. The range of my Lumix is 24mm-720mm, which is plenty wide-angle or zoom to capture any moment.

Your habit of framing the "horizon...either super high or super low", is a wise technique that every photographer eventually learns (this is a compositional technique that even professional photographers have learned from old master painters). Plus - photography and words can interact almost alchemically in our minds to create a spontaneous symbiosis of words and imagery - your website proves it!

It been a while since I been on a ferry. But I do enjoy them.
Coffee is on

My previous camera was a Lumix. Loved it a lot and would not be averse to going for another Lumix after my current 28x zoom Sony Cybershot conks off.

And absolutely re my having learnt/drawn inspiration from the old masters! Obviously my photographs can't compare to their pictures but it's true enough that they've given me some ideas with regards to picture composition, etc. :)

I have a feeling that there aren't all that many ferries near where you live -- whereas that's not the case for me here in Hong Kong... ;)