When my German friend and I visited Luxembourg in December 2014, we were surprised to discover that its Palais Grand Ducal was located in a central area of the capital city, with souvenir shops and eateries as well as the high court building and the home of its national legislature located within a stone's throw of the Luxembourg ruler's official residence.

If anything, the Royal Palace Amsterdam appears to be situated even closer to "the masses" -- with it abutting Dam Square, where tourists, hot dog and hamburger sellers and buskers dressed like Darth Vader and Death abound!  Even more amazingly, I never saw anything approaching the Dutch equivalent of, say, the bearskin-hatted sentries at Buckingham Palace -- whose daily Changing of the Guards ceremony I loved watching as a child -- outside the palace. Also, there didn't seem to be all that many security guards about when my German friend and I went and visited the publicly accessible sections of this royal residence!

Something else I found interesting about that which is known in Dutch as either the Koninklijk Paleis Amsterdam or Paleis op de Dam is that its building had originally been constructed as Amsterdam's town hall -- and, in fact, had that function from 1648 to 1808.  One look at the photos of its interior below, though, and I think you'll agree that it actually is pretty palatial looking all the same...even if also creepy at times! ;b 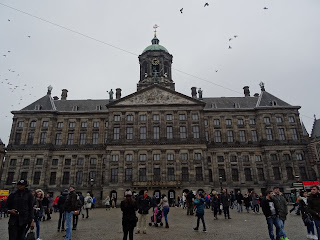 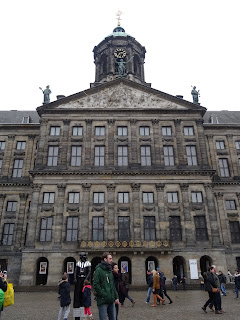 No I was not kidding about spotting Darth Vader
at Dam Square, and in front of the royal palace! ;) 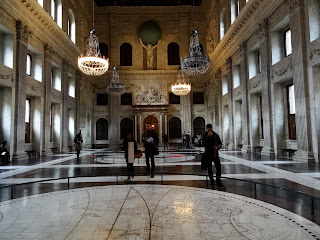 Walk in to the palace -- particular its Citizens' Hall -- though,
and you'll feel like you've been transported into a different world! 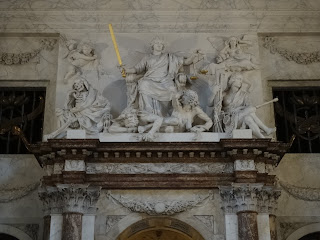 At one end of the hall can be found this dramatic scene,
at the center of which sits Justice with a sword in one hand
and the scales in the other 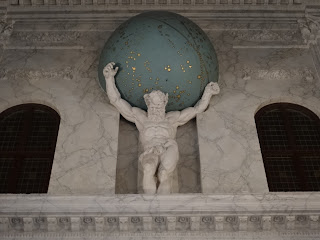 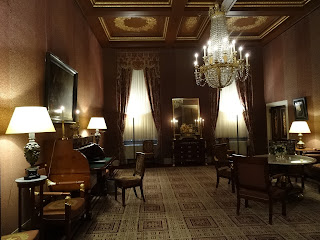 What by palatial standards is a more workaday room ;b 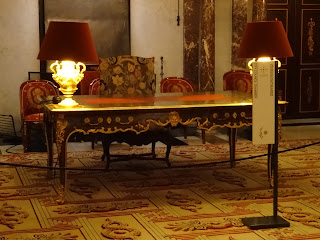 In 2013, Queen Beatrix signed her abdication papers at this very desk,
while sitting on the very chair behind it -- and in so doing,
passed on the Dutch throne to her son Willem-Alexander 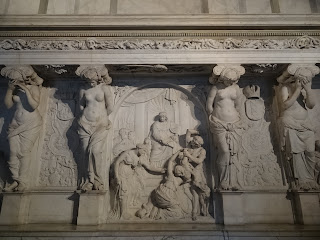 In truth, such as these sculptures in the room known as the tribunal
gave me the creeps, and had me wondering why royals would choose
to live in this building, however grand parts of it really is! ;O
Posted by YTSL at 6:37 PM