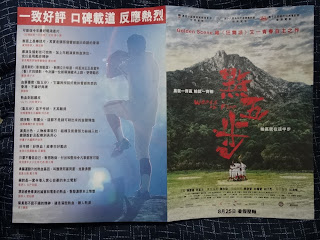 Publicity leaflet for Weeds on Fire


Back in 2008, the filmmaker who goes by the moniker Scud and veteran director Lawrence Lau (aka Lawrence Ah Mon) co-helmed a Category III movie starring real-life members of the Hong Kong national baseball team which was hardly your average sports drama.  And although it does possess segments showing baseball practice sessions and actual baseball games, City Without Baseball tends to be remembered far more for such as its nude shower scenes and exploration of bisexuality.


As might be expected of a cinematic work made with prize money from the government's First Feature Film Initiative, Hong Kong's second baseball movie is a quite a bit more conventional.  Inspired by the true story of the Fragrant Harbour's first youth baseball team, first-time director Steve Chan Chi Fat's Weeds on Fire had its world premiere at this year's Hong Kong International Film Festival and has a former Hong Kong Chief Executive turning out to have a key role in the team's establishment decades before he ascended to that high office -- and, for that matter, more than 10 years before Hong Kong ceased to be ruled by the British.


On the other side of the political coin: Among the more surprising aspects of this earnest coming-of-age film cum sports movie is its makers looking to have gone out of their way to feature scenes in which a key character is seen on a street in Admiralty "occupied" by tents and pedestrians and make it so that this admirable offering's pragmatic yet inspirational message extolling the importance of taking half a step forward (rather than no step at all) can come across as applying to the Umbrella Movement as well as individual lives.  At the same time though, it's true enough that Weeds on Fire is mainly set in 1984 (seven years before its 25-year-old helmer was born!) rather than 2014 -- and largely focuses on personal rather than political dramas.


As it so happened, 1984 also was the year that the Sino-British Joint Declaration was signed.  But what more immediately concerns and affects the lives of this sport movie's underdog protagonists is the setting up by Mr Lo (Liu Kai Chi), the headmaster of a Band 3 secondary school in the (then) new town of Shatin, of a school baseball team that would have to play and compete with teams whose players were foreigners (Americans, Japanese, etc.) living in Hong Kong rather than fellow Hong Kongers.


Among the motley crew of students who Mr Lo recruits to play a sport that the vast majority of Hong Kongers have little knowledge of are a pair of friends who live in the same public housing estate but possess very different personalities.  Cocky extrovert Fan Chun Wai (professional baseball player Tony Wu Tsz Tung channelling -- and looking quite a bit like -- a young Bruce Lee) is assigned the leading role of pitcher and fancies himself to be the Shatin Martins' best player.  His quieter and less confident pal, Tse Chi Lung (Lam Yiu Sing), takes on the role of catcher, a position that has him literally donning a mask and protective gear on the field.


Handsome and charismatic, Fan catches the eye and holds the attention more at first than the more restrained Lung.  Still, those who have seen their share of sports dramas will be able to comfortably figure out which of these two youths emerges as the real hero of the movie.  And it should be equally easy to predict how the Shatin Martins fare both in the very first game they play and also the baseball tournament that they then go on to take part.

Far more difficult to fathom, actually, is how and why Principal Lo came to have a particular passion for baseball (rather than, say, soccer or some other more popular sport) since this never gets explained in the movie.  On the other hand, as Weeds on Fire proceeds to show, there's little question of his -- and the pioneering team he coached as well as established-- having played a big part in ensuring that there is at least a part of Hong Kong that's not a city without baseball after all!

Thanks for the review! I remember that you gave this film 6 out of 10 initially (under "Most recently viewed movies"). Have you seen the film again to make you score it higher, or is it one of those films that get better the more you think about it?

Wow, you remember the rating I initially gave "Weeds on Fire"?! And ya, I think it's one of those films that gets better the more I think about it. Among other things, I think it's a good sign that I remember sections of the movie pretty vividly more than one month after having viewed it. Also, I got to realizing while I was writing the review that there are times when it may be better to err on the side of convention than trying to be different just for the sake of novelty. :)

The way this film's been promoted makes comparison with "The Way We Dance" inevitable. So is it not as good as "Dance" since you gave it a lower score?

Interesting that you noticed that the marketing campaign for "Weeds on Fire" resembles that for "The Way We Dance" even though you don't live in Hong Kong! And alas, no, I don't think this new movie is as good as "The Way We Dance" -- which really did blow me away.

On the other hand, I do appreciate that, in recent years, along with these two films, there also have been other local movies like "Dot 2 Dot", "She Remembers, He Forgets" and "Little Big Master" that go beyond the usual crime and martial arts tropes and themes, and are full of local flavor.