Where I go to drink alcohol in Penang :) 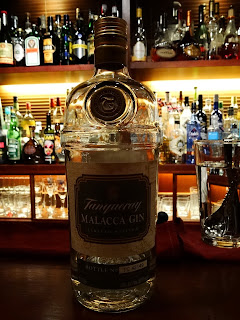 A lovely gin named after the Straits of Malacca! 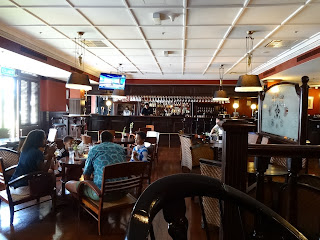 An atmospheric bar located just a stone's throw away
from that same body of water! ;b


After learning about my feasting on durian and other yummy fare on my recent Penang trip, various friends have told me they'd like to go with me on my next trip back to my home state.  But while he seems pretty sure that he'll enjoy whatever food he'll get to sample in what I honestly reckon is a veritable foodie paradise, my South African drinking buddy felt a need to ask me if there are any good watering holes in Penang.


I realize it can shock those folks who have come to know me in Hong Kong and the other parts of the world where I've lived besides Malaysia but: firstly, I actually don't spend that much time in bars -- or, for that matter, pubs -- when I'm in Penang; and secondly, don't tend to drink that much alcohol in Penang since I tend to like to eat when I drink, and prefer to non-alcoholic drinks when eating Malaysian food!  (Also, in the case of durian, there's a widely-held belief in Malaysia that a combination of durian and alcohol in your stomach may cause it to explode and/or you to die!)


For all this though, there actually is a bar in Penang that I like to go to -- because its bartenders are among the rare ones in Malaysia who know how to make good martinis and also because it's the kind of place where one's unlikely to encounter rowdy crowds.  Located in the historic E&O Hotel, Farquhar's Bar is named after an early 19th century British Lieutanant-Governor of what was then known as Prince of Wales' Island.  But in all honesty, I reckon that this atmospheric venue is far less "colonial" and hoity-toity than it may seem, and look at first glance!


Among other things, children are welcome into the bar along with mature females and males (though the legal drinking age in Malaysia is now 21).  Perhaps even more surprising is that the prices of the drinks at Farquhar's Bar aren't ones that will make you choke.  Indeed, back when I was still living in Penang, I discovered that the price of its pints of Tetley's were lower than at the Soho Free House nearby on Penang Road which looks more "pubby" and -- consequently, for a lot of people -- less "intimidating".

On my recent visits to Farquhar's Bar, I also noticed that it looks to have improved as well as broadened its range of alcoholic offerings.  To be sure, it may not (yet) stock the rare Tanqueray Malacca Gin which I love for the taste as well as name.  But they do have such as the very palatable Hendrick's Gin -- which I proceeded to enjoy as an ingredient in martinis (which the Farquhar's Bar folks tend to make in a more "old school" style that favors enough vermouth in the drink to make it slightly yellow) as well as gin & tonics! ;b
Posted by YTSL at 7:16 PM