Nagasaki: Memories of My Son is a rare Yoji Yamada misstep (film review) 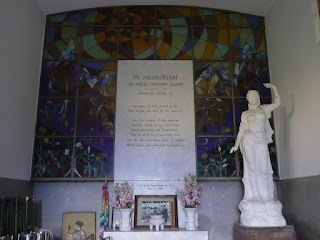 
In 1982, I visited Japan for the very first time.  Among the places I went to on that trip are ones that I've re-visited, such as Tokyo, Kyoto, Osaka, Fukuoka and the Aso Caldera.  But I've yet to return to the Japanese city which may well have left the deepest impression of the trip on me: Nagasaki, one of the two cities in the country which will forever be associated with the atom bomb.


A decade after my maiden visit to Japan, I viewed a film whose female protagonist was an elderly resident of Nagasaki who had been in the area when the atom bomb nicknamed 'Fat Man' was dropped over the city.  Akira Kurosawa's Rhapsody in August is considered to be a minor work of the late Japanese cinema giant but I was very moved by it all the same.  And I expected to be similarly affected when viewing another drama centering on a Nagasaki woman who managed to survive the Second World War; this one made by an octogenarian filmmaker -- many of whose other works (including What a Wonderful Family!, The Yellow Handkerchief (1977) and installments of the Tora-san series) I love -- and released in its native Japan 70 years after World War II came to a close.


Set closer to the end of the Second World War then Akira Kurosawa's 1991 film, Yoji Yamada's Nagasaki: Memories of My Son takes place in a Japan now at peace but still struggling to rebuild shattered lives (along with physically devastated cities), and facing hard economic times.  Living in a house in the hilly outskirts of the city, Nobuko Fukuhara (Sayuri Yoshinaga) works as a midwife and is able to come by hard-to-get items courtesy of a friendly black marketer (Kenichi Kato).  But she remains badly hurt psychologically by having lost close family members, particularly her younger son Koji (Kazunari Ninomiya) -- who effectively vanished into thin air, having been one of the thousands incinerated by the blast of the atom bomb that was dropped on Nagasaki.


The apple of Nobuko's eye, Koji was studying to be a doctor and in love with Machiko (Haru Kuroki) when tragedy struck.  On the third anniversary of the Nagasaki bombing, Nobuko tells the also still grieving younger woman -- who treats Nobuko like she's her beloved mother-in-law, regularly visiting her home and trying to make her life more pleasant in various ways -- that it's time for them to let go of Koji.  That evening, Koji's ghost returns to visit his mother from "the other side"; an event which Nobuko reacts to with far more happiness than shock -- and definitely minus any horror!


From then on, much of Nagasaki: Memories of My Son plays out like a two-handed theatrical work featuring lots of dialogue and reminiscing.  Koji comes and goes from the house (including once to go watch a movie in a cinema!), and Nobuko continues responding to requests for help to deliver babies into this post-atom bomb explosion world.  But the two get to spending a not significant amount of time catching up as well as looking back; over the course of which strong emotions get divulged, expressed and need to be wrestled with.


Still, while much emotion is on show in the film -- and also a number of scenes that look to be geared at getting viewers to reach for tissues or handkerchiefs -- I actually ended up feeling more emotionally distanced from what unfolded on screen than I had expected to be.  Perhaps it didn't help that there was a "stagey" quality to the proceedings.  Actually though, I reckon that the biggest problem I had with the film was how much it took place in a veritable vacumn which not only privileged the interactions between mother and son above all others but also opted to exclude mention of any bloodshed and atrocities wreaked by Japanese people in the days, months and years leading up to the bombing of Nagasaki (and Hiroshima three days earlier).


Put another way: Yes, the damage and devastation caused by the atom bombs was absolutely awful, and it can seem rather ironic that one of the targeted cities was Nagasaki -- with its significant Japanese Christian population and history, never mind people (like Koji) who loved Western classical music and such.  But those weapons of mass destruction didn't just drop out of the sky for no reason!  And Yoji Yamada (born in 1931, and consequently one of the few active filmmakers today who lived through the Second World War) really would have done more of a service to the film's audience -- local Japanese or otherwise -- and probably also made the movie better by acknowledging that.