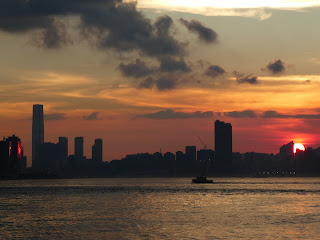 Dark clouds over the city too

Surprise, surprise (not really): the national security law for Hong Kong has been unanimously approved by the Standing Committee of China's rubber stamp National People's Congress. All this with no member of the Hong Kong government (including Chief Executive Carrie Lam), let alone members of the public, having actually seen actual drafts of the sweeping law that contains six chapters and 66 articles.

Early on in the day, the reports had it that the draconian law was expected to come into effect tomorrow, the 23rd anniversary of Hong Kong’s handover to China from British rule (and 99th anniversary of the founding of the Communist Party of China -- so yeah, the CCP probably is looking upon this law's passing as nice birthday present for itself).  Carrie Lam has since stated that it came into effect this evening.  All in all, it really does feel like quite the rush job, reminiscent of China's notorious "tofu buildings" whose shoddy construction can lead to serious problems, including a distinct lack of safety for those who spend time in them and sometimes even their outright collapse.


Ahead of what's been termed the second handover of Hong Kong (this time, by the government of Hong Kong to their bosses over in Beijing), we've already seen the scraping and deleting of various social media accounts.  But things escalated this morning with the likes of Demosisto officially disbanding hours after Joshua Wong, Agnes Chow and Nathan Law announced that they were leaving it and a number of "yellow" shops deciding, for their safety, to go ahead and take down the protest art and signs that had adorned their stores or publicly stating that they were leaving the yellow economic circle.

How long will it take before Hong Kong feels like just another Chinese city?  In all honesty, it's been feeling far less free than it is supposed to be the case for quite some time already.  (Think, among other things, of the kidnapping of the Causeway Bay bookstore booksellers a few years back.) So rather than death in one fell swoop, it's really been death by a thousand cuts -- or, since Hong Kong is not actually dead yet, let's say at minimum that the city is being subject to the slow but painful drip, drip, drip of Chinese water torture.

So, what now? Just lie back and think of England?  This much we do know (this by columnist Peter  Kammerer today):


The target is anyone who opposes, or even suggests opposition to, the Chinese Communist Party and its authority. As Beijing has the ultimate say in all matters pertaining to Hong Kong through its right to interpret all provisions of the Basic Law, the city’s mini-constitution, the Hong Kong government acts as its local arm and is therefore also covered."

People who don’t get the hint end up in prison; Nobel Peace Prize winner Liu Xiaobo, who was one such advocate, died there. That the Basic Law speaks of universal suffrage is immaterial; China’s constitution also mentions democracy.

And yet, as Kammerer goes on to note: "The law will not end protests or calls for genuine democracy. Hong Kong is not the mainland; people here think differently on account of their distinct history and experience, so oppressing, suppressing and threatening will not work."

Also, as lawyer-political commentator Antony Dapiran has observed: "Sentiment seems to have shifted over last few weeks from, initially, despair & a sense that any protest is futile, to now an increasing defiance."  (Indeed, reading this piece written by Jessie Lau, a British-based Hong Konger today, I actually felt that she's in significantly greater despair about what's happened to Hong Kong than anyone I know who's currently living here in the Big Lychee!)

At the very least, the prevailing sentiment among many folks is -- to quote Kammerer one more time -- that:  "We should continue as we always have, doing and thinking as we do. To change our ways would be to give up Hong Kong’s advantages to other cities in China. If there is to be a knock on the door by secret police at 3am, it will come when it does. Let’s hope this isn’t what Beijing means by national security" (because, even at this late hour of the day, we still haven't been privy to the text of this new piece of legislation imposed on Hong Kong!)
Posted by YTSL at 11:42 PM