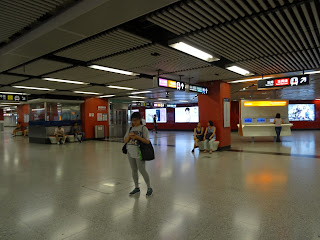 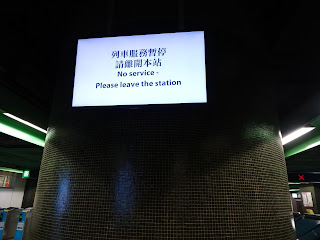 The electronic sign that greeted me on my arrival
at the MTR stop closest to my home!
Last Saturday night (or maybe I should say very early on Sunday morning?), I took the last train out of Central MTR station of the night for the very first time.  Unlike in Tokyo, it wasn't at all a crowded affair.  And despite Central MTR station being the closest MTR station to Lan Kwai Fong, Wyndham Street and other nightlife areas, I actually didn't notice anyone behaving badly (drunk or otherwise) at that late hour.
Instead, the scenes at both Central MTR station and the one closest to my home from which I exited were actually on the quieter and more peaceful side than is regularly the case earlier in the day (and night).  In addition, not only was the train that I took so not packed that I easily found a seat to sit on for the entire journey but I didn't see anyone looking like they were in a particular hurry to get on it.
All in all, it seemed like everyone who got into Central MTR station before the entrances were closed for the night were utterly confident that they would make it on to that last train before it left.  Also, that those folks who found that the MTR station entrances already closed knew that they would plenty of alternative transportation options to get home; what with their including taxis but also cheaper night buses and red minibuses.
Something else that seems like a matter of course for people in Hong Kong is how there will be women as well as men out by themselves late at night, and that both females along with males will feel perfectly comfortable and safe in these situations.  After years of being told and feeling that it's dangerous for women to be out at night by themselves when living in places like the US (where it takes real effort to take back the night), this is something I really love about being in Hong Kong -- and don't think that I'll ever take for granted.
Posted by YTSL at 10:15 PM

To me it looks like a lonely place. But I bet there a lot people going though there on a daily bases.
Coffee is on

Not that I go out late, but we are very lucky YTSL!

London Underground have started a weekend all-night service on two lines (more to follow). I'm sure it will be useful to a lot of people but I will do my best to avoid it.

Central MTR station is usually pretty crowded and busy. Reckon the people there late Saturday night were so happy to find it that quiet that they didn't have time to feel lonely! ;b

We are indeed very lucky in terms of what I wrote about on this blog post. Out of curiosity: what's the latest that you've been out at night in Hong Kong (vs, say, Vancouver)?

I had read about the London Underground offering 24 hour service on the weekends. Am not sure if I'd ever avail myself of it though as when I was out late at night in Hong Kong (around the time that pubs closed), I definitely didn't enjoy being out the way I do at the same or later times in Hong Kong... ;S