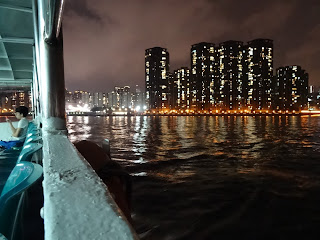 On a ferry ride offering scenic sights like this, wouldn't you
want to drink in the views rather than look at your phone's screen? 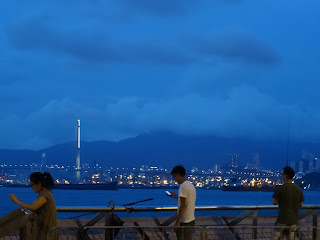 Maybe the people looking at their phone screens in the above photo
were checking out photos that had taken on their smartphones... ;S
Take time to stop and smell the roses.  This is a piece of advice that pretty much every one living in the "hurry, hurry, go, go" city that is Hong Kong would benefit from obeying every once in a while.  And now with the vast majority of the populace hooked to their smartphones, this territory with a mobile phone penetration rate of 227,8% as of May 2016, it seems that people would also benefit from the recommendation that they look up from their smartphone screens to check out and appreciate the surrounding scenery every once in a while too!
I'm sure this blog's readers have seen the famous photo of the fellow who missed catching sight of a giant humpback whale that swam so very close to his boat because he was focused on what was on view on his smartphone screen.  Maybe he's the kind of guy who doesn't much care if he makes a rare critter spotting or not.  On the other hand, I -- who was super thrilled to catch glimpses of whales swimming in the wild while cruising on the Hurtigruten's MS Richard With in Norway last summer -- am one of those people who would have majorly crushed if I have missed seeing a big and wonderful wild creature like that when it was just a few feet away from me!
But, then, I increasingly feel like a rare, and sometimes even downright weird, individual here in Hong Kong because I'm the kind of person who (still) enjoys looking out the window -- rather than down at the screen of my mobile phone -- when I riding a bus, minibus, ferry or whathaveyou over here.  After, this is a part of the world where smartphone zombies roamed the land (and sometimes surrounding waters too) even before the current Pokemon Go craze gave smartphone addicts one more reason to glue their eyes to the screens of their mobile phones!

To be honest though, I don't care or worry all that much about other folks thinking I'm crazy for not doing what everyone else does.  For one thing, I'm frequently enjoying viewing the passing scenery or "just" people watching too much.  For another, I figure most of the people around me when I'm out and about in urban Hong Kong have no idea what I'm doing since they don't have eyes (and frequently ears too) for anything taking place outside the frame of those small screens on their phones anyway! ;D
Posted by YTSL at 11:44 PM

I love night and twilight photography, especially like these memorable views of water, city lights, clouds and humans who sometimes do resemble mobile device "zombies". (A more severe example would be your recent posting of Pokemon zombies in a park).

Everyone would probably react differently to your photos and text. For me, they are quite dreamy, even hypnagogic, but they all possess the kind of beauty many urbanites, in their coming and going, take for granted. The top photo is especially striking, with the surreal reflection of lights on the water, and the youth on the extreme left, seemingly oblivious to the passing environment around him.

I don't think to take as many night shots as I probably should -- especially given your positive reaction to this blog post! Thanks for your comments; it's much appreciated. :)