On Po Toi, including Nam Kok Tsui and the Rugged Trail (Photo-essay)

Ever since my first visit to Po Toi back in September 2009, Hong Kong's southern-most island has been one that I've very much enjoyed visiting.  If only the kaito service were more frequent -- with there still been just four departures from Stanley to that rugged, rocky island on Sundays, one on Saturdays and none at all on weekdays (and just one from Aberdeen on Tuesdays, Thursdays and Sundays along with a whopping two on Saturdays) -- I'd go more often.

Because the kaito service is limited and there's no overnight accomodation available on Po Toi, I've always tried to make sure to catch the second last kaito departing from the island (rather than the last kaito of the day because I worry about it getting too full).  Nonetheless, each time that I've been on Po Toi, I've managed to venture onto "new" ground; with my going on its Rugged Trail (which I previously couldn't visually make out!) on my second visit, and "off trail" to the island's southern tip on my third visit... ;b 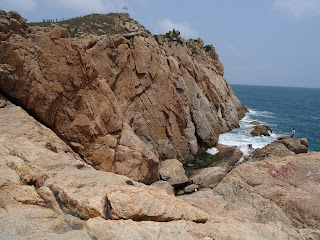 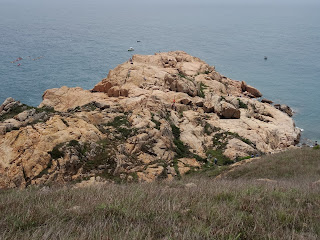 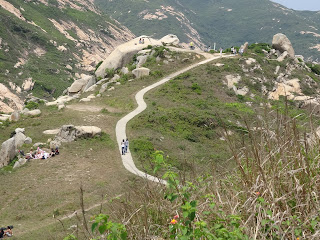 Even with people perched on it, Po Toi's Turtle Rock probably still
is my favorite rock formation to photograph in Hong Kong :b 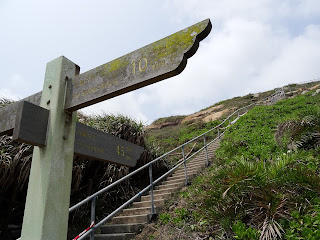 Some of its sign posts and railings are not in the greatest
of conditions but I still enjoy hiking on this scenic island :) 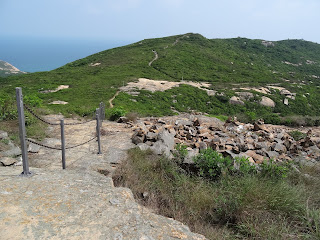 Follow the Rugged Trail if you can, and you'll be rewarded
with cool scenery and a feeling that you're in a part of
Hong Kong where not too many other people have ventured :) 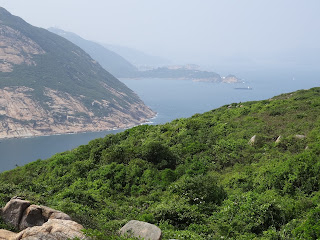 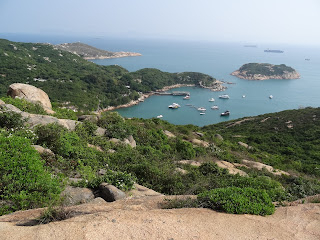 Viewing Po Toi's pier and Nam Kok Tsui to the east from
this side of the island and elevation should give a good sense
of how far I had hiked (already) that afternoon ;b 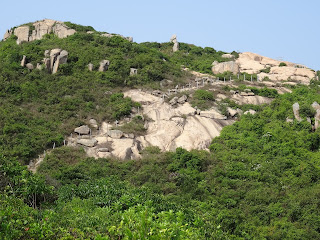 A section of the Rugged Trail that threatened to turn my legs
to jelly, and which I was happy to be able to look back on later :)
Posted by YTSL at 9:53 PM

I need lots of stamina for this rugged trail. Phew! Looking at the rocky terrain makes me tired. hahaha..... But I have to admit, it has lovely scenery.

The third photo from the top of Turtle Rock has long been my very favorite photo of any that you've posted. Po Toi appears to be an outdoor museum of geological sculptures - with Turtle Rock being an example of an anthropomorphic rock classic.

Hiking in Po Toi is not everyone -- and I'm glad to be able to give those who don't think they can go on the rugged trail a visual taste of what it's like to go on it! ;)

Er... I don't think I've put up the particular photo of Turtle Rock that I included in this post before. But I have indeed taken more than one photo of this anthropomorphic rock that really does resemble a turtle climbing up a hill to my mind, and shared them on this blog! :)

Er...You're right. Actually, this photo of Turtle Rock is very similar to my "favorite" rock photo from your blog entitled Tortoise Rock Wars, April 26 2015. Both of these photos were taken on the same day: notice the person in the yellow shirt standing near the Turtle's head.
Well, in any case, I do like both photos. However, I must confess, I now prefer this current posting of Turtle Rock over the earlier one I referred to.

Teehee, I'm glad you like both those photos. But, actually, my favorite photo of Turtle Rock doesn't have anyone sitting on it -- see the following:-
http://webs-of-significance.blogspot.hk/2010/05/on-hong-kongs-southern-most-island.html