Multiple large and small critter spottings on a hike from The Peak down to Aberdeen! 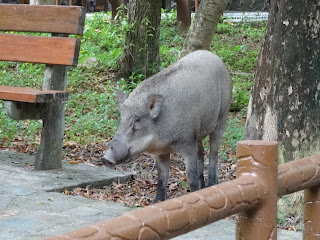 An actual wild boar spotted at the tail end of today's hike! 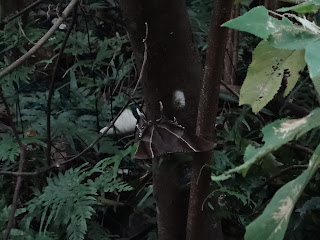 Can you see the rather well camouflaged tropical swallowtail moth
hanging upside down on the tree trunk in the above photo? ;b 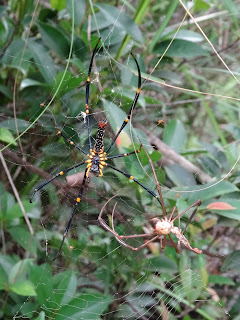 There are a few spiders in the picture but
does that dessicated looking creature count as one? :O

Early on during my latest hike from Victoria Gap down to Aberdeen, I remarked to the friend I was with that I've found The Peak -- that part of Hong Kong associated with incredibly expensive homes and their super rich residents that's a major tourist destination -- to be home to a surprisingly interesting and diverse as well as rich amount of wildlife.  Some four or so hours and an unexpectedly large number of critter spottings later, both my friend and I were agreed that the sections of Pok Fu Lam and Aberdeen Country Parks we had traipsed through this afternoon look to be home to far more creatures big and small than we had hitherto realized!

Perhaps it was a factor that this afternoon turned out to have lower visibility than I had thought would be the case and, consequently, we tended to focus on looking about the area immediately around us.  Ditto re today's high heat and humidity causing our walking pace to be slower than might otherwise be the case (as well as leading to our sweating so much that it looked like I, for one, had been gone for a bath in a stream with all my clothes on at some point during our outdoor excursion!).
In any event, the critter spotting began up on Victoria Gap, where a swarm of dragonflies buzzed about in the air near the entrance to Pok Fu Lam Country Park closest to The Peak Galleria.  Minutes later, when walking down along the steep -- and closed-to-traffic -- Pok Fu Lam Reservoir Road, I spotted the first of three butterfly species I hitherto had never seen before (something that's still very possible after some nine years of hiking in Hong Kong on since the Big Lychee's home to around 240 different butterfly species)!
But even though we did catch sight of a large number of dragonflies and butterflies this afternoon, I got the distinct feeling that my friend will forever remember today's hike as "the big spiders and waterfalls hike" because we sure did come across a lot of arachnids and vertical water flows today.  All in all, it's entirely possible that we saw some 100 different spiders (many of them pretty large ones like those I saw on the southeastern Lamma hike that I will forever think of as the big spiders hike!) and passed by perhaps up to 10 different waterfalls, many of which would be mere trickles of water -- if that -- in drier times of the year.

For my part, this hike was really memorable for my spotting three types of critters for the very first time out in the wild along with those three previously mentioned species of butterflies. The first of these was a tiny bug which, like with a similar tiny critter I spotted atop a railing on the way to Sham Chung, I wouldn't have realized was a living creature until I saw it actually move!  The second was a Lyssa zampa (i.e., swallowtail moth) -- that my friend thought was bat-like and which I initially mistakenly assumed was a swallowtail butterfly (since I had not realized until I did some research post-hike that there actually were such distinct entities as swallowtail moths!).
But even though I had previously seen a representative of its species in a fenced enclosure at Kadoorie Farm, I must admit to getting the most excited at beholding not just one but two wild boar near the entrance of Aberdeen Country Park that lies closest to Aberdeen town!  Something else that I must admit to is my not having done the safe thing and steered clear of them.  Instead, I obeyed an urge to get closer to get some photographic evidence of my Hong Kong wild boar sighting and encounter!
In retrospect, that really was not the smartest thing to do in the situation.  But, well, the wild boar actually seemed smaller and way more placid than I had imagined that they would look and be.  And, actually, I give those wild animals a lot of credit for not freaking out at the sight and sound of humans, many of them excited and a few given to exclaiming more loudly when about large wild creatures than even I know should be the case!  Instead, they appeared content to root around for food within the country park -- rather than venture beyond, where not that far away lay lots of edible offerings laid out for the hungry ghosts thought to be roaming around at this time of the year!!
Posted by YTSL at 10:55 PM

I have not seen any of them yet, but wild boars had been spotted in the Aberdeen water front a few months ago. There were reports that they were spotted near a school in Apleichau on slopes as well.

I had been told by an elder who hang out on the Peak all the time that if you are lucky, you might be able to spot Wild Boars up there too. There are traces of them, say, the holes they dug for edible roots, or the places they rest where vegetation were flattened. If only you know where to look.

Wow! They're getting more couragous these days. They always hang around inside the bushes and seldom go to open air like that in your picture.

I've been told by a friend that wild boar frequently appear on or around Mount Parker Road in the late afternoon/early evening. Funnily, bar for one friend, all the people who've told me of their having seen wild boar have all seen them on Hong Kong Island! :O

And I've seen some holes, etc. in country parks that got me wondering whether some thieves have dug out a tree or such. But upon reflection, they could have been made by wild boar!

Have you seen wild boar before? If so, where?? And maybe they're feeling a need to venture into the open to get food -- though having said that, the two wild boar I saw yesterday didn't look all that emaciated!