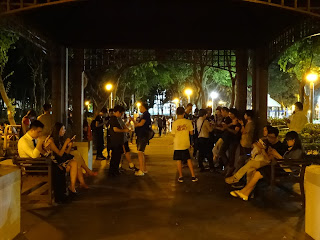 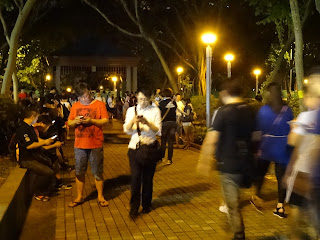 Sorry, there are no prizes for guessing
what all these people were up to!

After having dinner along with two glasses of Old Rasputin Imperial Stout on draft at Second Draft last night, I decided to go for a post-meal stroll that included a walk through Victoria Park.  Open 24 hours, this public park is well-lit after darkness falls and a pretty popular facility at night as well as during the day.
And once I shook off my fear of being in parks and such spaces at night that I learnt from years of living in crime-ridden Philadelphia, I found myself enjoying my periodic evening strolls through Victoria Park; during which I sometimes would pause for a bit to check out the football (or soccer in American speak), basketball and tennis being played, and also the tai chi forms (including those involving swords!) being practiced there by various enthusiasts.
Last night, I also saw the park's one outdoor handball court in use for the first time by people who were actually playing that game rather than being used as a makeshift footballing area -- and it was interesting to see that a crowd of curious onlookers had formed to watch this game that I had played for a time at school in Penang but is evidently far less known in these parts than the likes of football, basketball and tennis.  But that crowd near the handball court was nothing compared to the mass of people who had gathered in a nearby space, the great bulk of whom were looking down at their smartphones while standing, seated or walking slowly!
Although I definitely have not been caught in the insanity, even I -- who still refuses to have a smartphone (since my old Nokia phone continues working reliably) -- realized pretty much instantly that I had found myself in the middle of a group of people playing Pokemon Go who had gathered in the vicinity of what probably was a Pokemon Nest or Poke Stop.  After all, it seems like virtually every smartphone user (including a certain Pear Fairy who has had to tell some people, "I'm not Pikachu, I'm Funassyi!") has been going on about this game as well as addictively playing it!
I have to admit to being initially annoyed, not just bemused, by how Pokemon Go has turned more people into smartphone zombies than already had been the case previously.  But the impression I got while observing the Pokemon Go crowd at Victoria Park last night was that the game might actually get some people to get more exercise and fresh air than they usually do -- which seems like a good thing.  Also, it was interesting to see families (parents and their young child(dren)) playing together as well as friends and courting couples -- again, something that appears to not be a bad thing!
Still, I have to say that I have zero compulsion to play the game.  Also, I'm so glad that the two smartphone owner friends I had dinner with last night are not fans of the game, so we actually managed to have a pleasant time together without someone getting distracted by the sight of a Pokemon and an urge to go find, capture, battle or train one of those virtual creatures! ;b
Posted by YTSL at 11:58 PM