Especially for fans of Puppet Ponyo... ;b 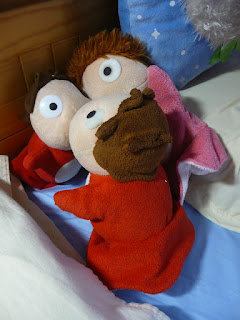 The Ponyo sisters hanging out at home in Hong Kong 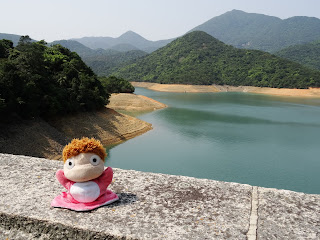 Puppet Ponyo posing at the Tai Tam Tuk Reservoir
on a rare day out in the Big Lychee :) 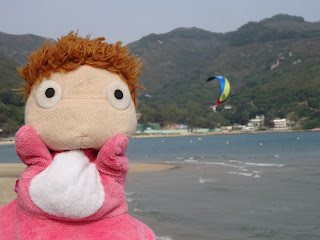 Puppet Ponyo looking rather anxious for some reason
out on the beachfront at Mui Wo ;)


In the comments section of the hiking photo-essay I posted on this blog last Friday, regular reader -- and commenter -- Bill wondered how his favorite puppet plushie was doing.  While he was most certainly correct in his assumption that she was hanging out with the other Ponyo sisters at the time of writing, here's going ahead and giving him some visual evidence that Puppet Ponyo does venture outdoors in Hong Kong every now and then!


Although she certainly does enjoy visiting other territories (including Germany, Japan, Macau, Vietnam, South Korea, Luxembourg, Norway and The Netherlands), my regular travelling companion could be said to be most at home in Hong Kong.  This is, after all, the part of the world where Puppet Ponyo has done such as gone out hiking with me, to the beach, museums, and even a wetland park and a concert as well as knows that she's always free to just chill on my bed with Stress Ponyo and Muse Ponyo!

At the same time though, it's true enough that the territory where Puppet Ponyo gets recognized the most and also attracts the most positive reaction is the Land of the Rising Sun.  In addition, Japan is where I'm most likely to encounter strangers willing to pose (with) Puppet Ponyo for me.


Those obliging folks who helped pose Puppet Ponyo in front of Kamakura's Daibutsu and the Tokyo Metropolitan Government's headquarters will forever have a place in my heart and memories.  And on my most recent Japan trip, another nice stranger offered to help hold on to my beloved travelling companion on the grounds of Matsumoto Castle when the winds threatened to blow the little puppet plushie -- if not away, then into either the castle's moat or the nearby sandy pathway!

On other occasions, my German friend, my Tokyo-based American friend, her mother, other good friends and my mother have been the ones helping to make sure that Puppet Ponyo will look good for my camera.  So, actually, one of the great pleasures when viewing many of the pictures of my beloved travelling companion is my remembering the other people involved in getting those particular photos taken as well as the places where Puppet Ponyo and I were at the time that those snaps were taken. :)
Posted by YTSL at 11:59 PM

I see a kite.
Coffee is on

The "kite" in the third picture from the top is actually is a parachute used by para-sailors like the one spotted over at Mui Wo's Silvermine Bay! ;b

Thanks for posting this thoughtful photo-essay on Puppet Ponyo. Judging by these photos, I'd say she's doing quite well...In the top photo, you've posed The Endearing One in a photo-portrait of domestic sisterly bliss. The second and third photos are as good an example as any of why this wondrous plushie from the world of animism, enhances the setting of wherever she visits - and at the same time, communicates to some of us a feeling of optimism and perpetual youth...As a final thought, considering the possibility of losing her or even theft, do you think the time will come when you decide to retire her from traveling and leave Puppet Ponyo safely at home, while you travel?

I'm glad you enjoyed this Puppet Ponyo blog post -- and hope that others do too!

In answer to your question: I've actually never thought of Puppet Ponyo getting stolen but I have ocasionally worried that she'd be blown away/into the sea (like when she was in Okinawa or Norway) or some other deep body of water, or otherwise losing her. And it's indeed possible that at some point, she'll feel to worn out and wish to retire from travelling. But at the present time and forseeable future though, I have few qualms about taking her travelling with me -- a state of affairs that I trust quite a few of us will welcome. :)