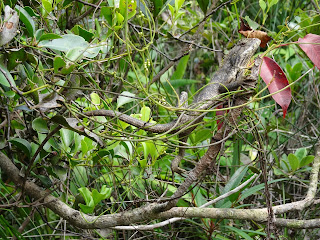 Can you easily spot the lizard? 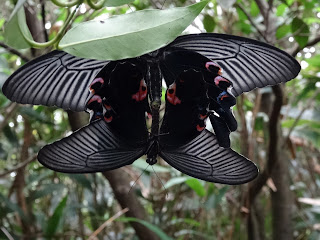 Unfortunately for these two randy butterflies, the leaf near them
didn't cover them as much as they may have thought it did! ;D
Earlier today, a friend and I hiked from Wong Nai Chung Gap to Stanley Gap Road.  Along the way, we got up to Violet Hill's two highest peaks (the highest of which is 436 meters above sea level and the second highest of which is just three meters lower) and went on a section of the Tsz Lo Lan Shan Path which I find to be on the creepy and critter-filled side; what with it being where I've made a snake spotting and regularly come across a number of large spiders (with today's spider count on that section of trail totalling 15).
What with last Sunday's hike having been heavy on the steps (and sweat shed) but rather light on the critter spotting, I wasn't expecting to catch sight of as many wild creatures this late summer afternoon as I did; particularly since my friend and I were out again today in Tai Lam Country Park, albeit a different section of this large country park which occupies more than one fifth of the total land area of Hong Kong Island if you also include its Quarry Bay Extension into the equation.  But even before we made it up to the first of the two Violet Hill peaks whose ascents we included in today's hike itinerary, I already had made two critter spottings that I consider to be greater hike highlights than the "conquests" of the two peaks!
First up was the spotting of a changeable lizard which is so called because it can change its body coloration.  Possessing a prominent crest along its neck and upper body, this agamid resembles a miniature dinosaur to my mind -- but only visually since, behavior-wise, it actually tends to be on the still and quiet side, with its defensive strategy tending towards the "freeze and hope that they didn't spot you" school rather something scarier.
Further up the northern side of Violet Hill, I came across two big butterflies which were more or less keeping as still as that changeable lizard because they were in the middle of a certain act that seems to require members of their species to not flit and flutter about the way they otherwise tend to do!  And while I have caught more than one pair of butterflies (and, for that matter, moths too) going at it previously, I have to say that this particular pair of Papilionidae were the largest butterflies I've seen performing this particular act.
So, almost needless to say, I did get pretty excited upon catching sight of those two big butterflies (temporarily) connected to each other!  And it did really please me that they were so engrossed in their own affairs that they didn't fly away even when I went ahead and thrust my camera close to them in order to snap pictures of them from both the front as well as the back! ;D
Posted by YTSL at 11:16 PM