Years ago, when I lived more or less on the other side of the globe, I viewed Herman Yau's From the Queen to the Chief Executive and learnt, among other things, about one of the most notorious homicides that took place in Hong Kong.  Since then -- morbid I know! -- I can't help thinking about the Braemar Hill murders whenever I venture into that often pretty quiet section of Tai Tam Country Park.

Still, it's not as though I've shied away from hiking in that part of the Big Lychee.  After all, Tai Tam Country Park (especially if you include its Quarry Bay Extension) is my favorite of the country parks on Hong Kong Island; what with such as Siu Ma Shan, Mount Butler and the Tai Tam Reservoirs -- all of which I've been known to make a point to pass by or through over the course of a single hike -- being located within its boundaries.  Then there's the matter of this part of Hong Kong being a place where interesting critter spottings can be made most times of the year... ;) 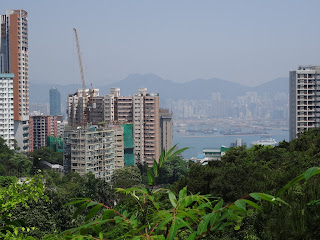 When starting a hike on Braemar Hill, one will find
oneself in green space above the city even before
officially stepping into Tai Tam Country Park :) 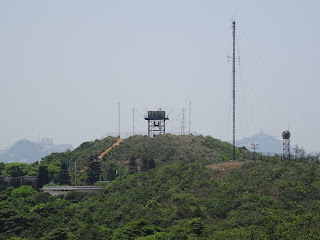 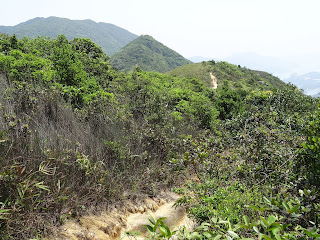 So, as I've done before on more than one occasion
when in this area, I made for Mount Butler instead 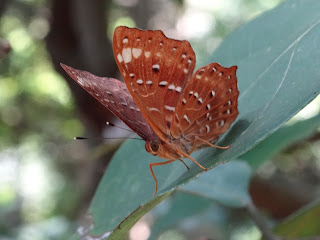 And, like on a previous occasion, I found the top of Mount Butler
to be a place which pretty butterflies appear to enjoy being on :b 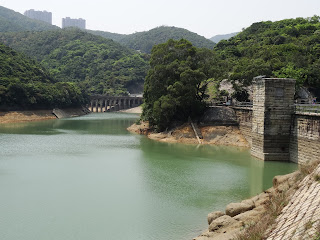 On this hike, I found the water levels of the Tai Tam Reservoirs
to be a good deal lower than I'm used to seeing 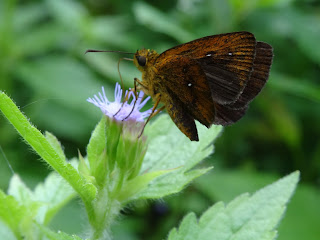 Is it just me or does this actually pretty small butterfly
look like it's got bee relatives? ;b 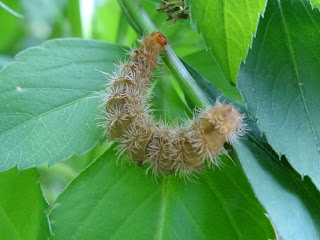 I wonder what kind of butterfly this caterpillar turns into? 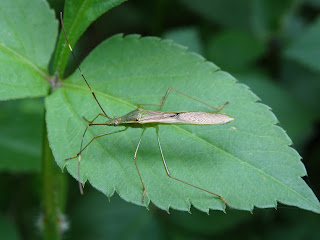 Anyone know what kind of bug this is?
Posted by YTSL at 11:59 PM

Last bug sort of looks like some type of praying mantises.

This is another one of your best Hong Kong island photo-essays. Third photo from the top, looking towards Mount Butler, is the kind of photo that brings out the passion some of us feel for treks which take us deeper into nature and elevate our spirits. Also, these are some of your best insect photos.

I hope Puppet Ponyo is doing well, resting at home with her two sisters and, I suspect - wondering is she'll go on another trip before the year is out.

Praise Buddha! At long last, a remastered blu-ray/dvd of A Touch of Zen has been released for the North America region (includes a printed note from King Hu and an essay by David Bordwell). Thank you Hsu Feng, for financing this digital restoration and for your determined wuxia warrior presence in this film which tried to transcend the genre - set against the backdrop of Taiwan's mountainous beauty.

Thanks for the suggestion but I don't think it's a praying mantis. Actually, I got to remembering that I have a bug book -- and after consulting it, I believe the bug in question's some kind of rice bug (Leptocorisa acuta)!

Oh my re your mention of Puppet Ponyo. As a matter of fact, I decided to take her along on this particular hike! Was debating whether to include a photo of her in this photo-essay... but there were so many bug photos I wanted to share! ;b

And enjoy your viewing of the DVD of "A Touch of Zen". I confess that it's actually not my favorite King Hu film: rather, that honor goes to "Raining in the Mountain". Any sign of a DVD for that about?

I don't know if they're going to release a remastered dvd of Raining in the Mountain. I have a dvd of this film playable for the North America region, in Cantonese with English subtitles. It was released years ago on the Bonsai Media label, which I suspect is a bootleg outfit. I don't know if it's available in Asia. On this label I also have The Valiant Ones, The Fate of Lee Khan and Dragon Inn.

I have to admit to not knowing all that much what's out on DVD vis a vis what's not these days as I do the vast majority of my movie viewing in cinemas and the like rather than at home. I've had the very good fortune to view "Raining on the Mountain" twice on a big screen -- once in New York, and more recently in Hong Kong. I've heard that there aren't many prints of the film in existence -- which is really sad as I think it's sublime.

BTW, I also really like "The Valiant Ones", "The Fate of Lee Khan" and King Hu's "Dragon Inn" -- though, of course, thanks to the presence of the great Brigitte Lin in the 1992 Film Workshop version, I like that one better. ;)

A touch of Zen, The Fate of Lee Khan & Dragon Inn are currently available at Amazon US. Amazon's descriptions mentioned they are labelled to be 'All Region' discs, playable anywhere and everywhere. 'A Touch of Zen' is listed as The Criterion Collection of region 1 discs.

The Valiant Ones is listed but currently not available. They are quite pricey though.

Those DVDs may be pricey but some people may have little choice but to buy them if they want to view those films (legitimately). In contrast, all those King Hu films have been viewable on a big screen in Hong Kong at least once in recent years. Sometimes I think Hong Kongers don't know or truly appreciate how lucky they are in this regard!

Under some circumstances and if the price is right, obtaining a DVD disc might be cheaper than going to the cinema. If you include the parking and chow......

Anyway, these days, one has the option of online streaming but I have to admit, the experience wouldn't be the same as sitting a cozy seat in your favourite cinema. I hope we still have those really big screen cinemas with us, but there are only a handful of them in Hong Kong now.

You might be right re the price but, all things being equal, I prefer to watch these King Hu films on a big screen -- for which they were conceived and bekong -- rather than on home video. Also... parking? The way I see it, most people in Hong Kong don't have cars. also, f you're going to factor in chow for when you go to a cinema, you should for when you're watching a movie at home too! ;b