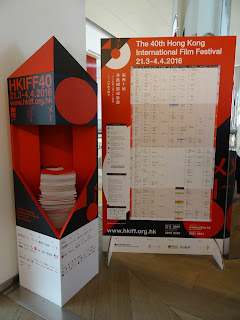 If you live in Hong Kong, grab a 2016 HKIFF program
and go check out a movie at the fest while you still can!


Too many times for my liking now, I've seen a movie begin brilliantly, only to disappoint by finishing weakly, undone by a plot unravelling too messily or looking like its filmmakers plain ran out of good ideas midway through.  All too rarely has it been the case that a film starts off steadily, even promisingly, and keeps on delivering surprise after surprise before producing such a dramatic climax that upon its conclusion, you're left gasping for breath, your heart pounding hard and fast, your throat dry and your hands sore from applauding the cinematic effort.


With respected veteran talent in its cast, it always was a pretty good bet that Atom Egoyan's Remember would be a well-acted film.  While those of us whose strongest memory of Christopher Plummer involves him portraying Captain Georg von Trapp in The Sound of Music may initially be shocked and distracted by seeing him as a frail, elderly man suffering from dementia, soon the thespian will have us viewing him only as Zev Guttman, a 90-year-old Auschwitz survivor intent on tracking down the concentration camp block commander responsible for the murders of his family members while he's still physically able to do so.


Two weeks after the death of his beloved wife Ruth, his fellow nursing home inmate and Auschwitz survivor, wheelchair-bound Max Rosenbaum (Martin Landau), sends Zev on his way to meet four men named John Kurlander living in different parts of North America.  One of this quartet, Max tells Zev, actually is Otto Wallisch, a Nazi masquerading as a Jewish concentration camp survivor.  And when Zev finds out which one he is, he is to shoot him (with a gun that Max directed him to buy, just as he directs Zev to do so much else with the aid of a letter with step-by-step instructions that Zev reads whenever he forgets -- which is often! -- what he's supposed to be doing).


As Zev goes along his quest, one's feelings for him change from pity at how pathetic he seems to be to fear at how he will fare, and so on and so forth.  At the same time, the more he interacts with various individuals he encounters along the way (including a young boy on a long-distance train they both take as well as the Kurlanders), the more the film's viewers will see things and people from Zev's perspective -- so that many of our emotions we feel while beholding certain scenes will mirror his.


Still, this is not entirely Zev's show (or that of the incredible actor who portrays him so poignantly), as those individuals that Remember's elderly protagonist ends up having extended discussions with -- among them a former soldier who fought with Rommel in North Africa, and a state trooper with far more intolerance and hate within him than his Everyman persona belies -- will leave indelible impressions in one's memory too.  Taken together, they also serve to emphasize that it really may not be a case of things being clearcut in terms of who's good and evil -- even when we're talking about people who served the Third Reich during the Second World War.


Since viewing this work, I've been surprised by the number of negative reviews of Remember I've found online.  Even worse are those writings, such as the film's Wikipedia entry, which contain unbelievably major spoilers about its story.  I'm so glad I went into the screening of this cinematic offering at the Hong Kong International Film Festival with so little prior knowledge that I even was shocked to discover from reading the closing credits who Martin Landau had played in the film (since he's another actor who played a favorite character of mine from childhood -- in his case, Space: 1999's Commander John Koenig -- and now is so much older than I had envisioned, and still able to disappear into a very different role!)!


While some critics consider Remember's plot too contrived and implausible, I found what ensued in this film to be believable and within the realms of possibility.  To my mind, Benjamin August's script also impressed in being far more nuanced and intriguing than one might expect upon reading that the work's a geriatric revenge tale.  Haunting as well as riveting, I have little doubt that this is one movie that I'll not be forgetting any time soon.