Intolerance is a lengthy, black and white silent movie worth spending a beautiful day indoors to watch! (film review) 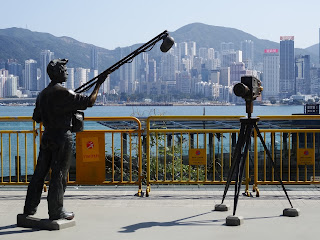 
After taking a day off from viewing movies on Saturday, I returned to the Hong Kong Cultural Centre on the first blue sky Sunday in weeks to take in another Hong Kong International Film Festival offering.  Arriving, as is my wont, about 40 minutes before the screening, I was astounded to not be met with the usual line to get into the screening venue -- and upon getting into the Hong Kong Cultural Centre's Grand Theatre, found it to be the least filled I've ever seen for a show.

A friend postulated that many of the people who had bought tickets to this screening of D.W. Griffith's Intolerance: Love's Struggle Throughout the Ages had decided, upon seeing how beautiful the day had turned out to be, that they'd rather be outdoors rather than inside a darkened auditorium watching a close to 3 hour length black and white silent movie made in 1916.  Doubtless some of those folks would have considered us fools for not having taken full advantage of a rare sunny spring day in Hong Kong.  In turn, I have to ask whether they knew what they were missing by not taking the chance to see this classic film restored to prime condition and playing on my favorite screen in the Big Lychee?

The grandly ambitious response of D.W. Griffth to charges of racism and historical falsification levelled on his The Birth of a Nation, this mammoth production employs a cast of thousands to showcase humankind's intolerance along with struggles to love against the odds over the ages.  Intolerance: Love's Struggles Throughout the Ages focuses on four particular sections of world history and intercuts back and forth between -- rather than episodically narrate -- their parallel but different stories.

That which takes place in Babylon during the reign of Belshazzar depicts how the fate of what was then, in 539BC, the largest city in the world was sealed by a high priest's intolerance and jealousy of a rival god's popularity even while showing the adoration of The Mountain Girl (Constance Talmadge) for her ruler (Alfred Paget).  Along with a female character far feistier than women to be found in films made close to a century later, this section of the film has incredibly impressive scenes whose scale has to be seen to be believed!

The segment centring on the Messiah (Howard Gaye) seems more mythical than historical, particularly since Jesus of Nazareth is portrayed as the kind of individual who is much more admirable and charismatic than any genuine human should be.  The shortest of the four interwoven stories, its most evocative images involve Jesus on the road to Calvary.  Although I could see it appealing to Christians, I feel that it's liable to play into negative stereotypes of Jews for those who are apt to forget or overlook that the individual the Bible named as the son of God was actually born a Jew, as was his mother, disciples and other followers.

The third of the four stories which collectively cover more than 2000 years of history takes place in 16th century France and details how the hatred of Roman Catholic Catherine de Medici (Josephine Crowell), the scheming mother of King Charles IX (Frank Bennett), for the Protestant Huguenots led to the terrible events that came to be known as the St Bartholomew's Day Massacre.  The story whose tale of intolerance is most clearly shown, it depicts so much politicking going on in court that the love story between a female character known as Brown Eyes (Margery Wilson) and her swain (Eugene Pallette) doesn't come across as all that strong.

While the three other segments have conclusions that those who know their history already would know in advance, the story set in what was then the present day (i.e., circa 1916) is able to be suspenseful and perhaps also surprising.  Although it has by the far the weakest lead female character -- one referred to as The Dear One (Mae Marsh) but whom I found far from cute or all that lovely! -- it is very strong in its depiction of how working class lives can be threatened and ruined by the lack of understanding and empathy, and consequently intolerance, of those who should know better.

Watching this century old film, it's impossible to not come to the conclusion that its helmer possessed filmmaking skills that put the vast majority of filmmakers who've come after to him to shame.  And even while Intolerance: Love's Struggles Throughout the Ages actually reveal many of D.W. Griffith's prejudices, I also am perfectly willing to believe that he was just a man of his time in this regard; specifically one during which, lest we forget, much of the world actually was at war (even if the U.S.A. didn't enter the fray until one year after this historical epic was released for the first time).


You've certainly taken advantage of the variety of offerings at the HKIFF with this excellent review of a silent classic. If one can separate Griffith's innovative techniques from his racial views, one is rewarded with essential storytelling of the early cinema.

Personally, I'm tired of today's commercial movies and I frequently seek refuge in silent films. That's why FW Murnau is probably my favorite director. He only needed minimal intertitles and let his camera do the rest - an example of a visual storyteller if ever there was one.

I like variety in my movie viewing -- and I love that the HKIFF and Hong Kong Film Archive is able to supply that. BTW, among the silent movies I've managed to view on a big screen since moving to Hong Kong have been "The Goddess", "Wings", "Battleship Potemkin", "The Great Dictator" and "La Passion de Jeanne d'Arc". :)

Am not yet tired of contemporary movies. Find that there's lots of interesting films out there still beyond the superhero actioners and such that dominate box offices. E.g., South Korea's "Veteran" may be commercial but I think it's really good as well as entertaining; ditto Hong Kong's "Little Big Master", the little big movie which fared surprisingly well at the local box office!