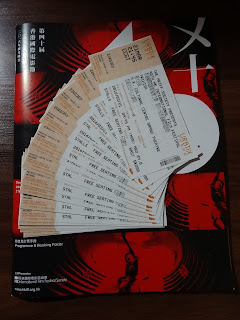 It's the second week of the Hong Kong International
Film Festival but I've not even been to half of the
screenings that I've got tickets for yet! ;O


Looking back at my childhood in Penang, Malaysia, I've come to realize that I grew up in an era when going to watch movies in cinema was a regular as well as family affair. For although neither of my parents would consider themselves to be major film fans, my preteen memories include going to see Shaw Brothers actioners, Taiwanese weepies starring a certain Lin Ching Hsia before she acquired a Western name, and mammoth Hollywood epic such as Lawrence of Arabia and Doctor Zhivago with them along with more conventional family fare like The Sound of Music and Mary Poppins.


As might be expected, I can't remember every one of those films' plot detail.  But certain scenes have stayed lodged in my memory all these years -- and in the case of the two epic works directed by David Lean, the certainty that these were great works with grand scenes that are best appreciated on a truly big screen.  This view was confirmed when I saw Lawrence of Arabia at the Hong Kong Cultural Centre's Grand Theatre at the 38th Hong Kong International Film Festival two years ago.  Consequently, I knew I would be in for a great show when Doctor Zhivago screened at the same venue as part of this year's HKIFF.


Based on a novel by Nobel Prize-winning Russian writer Boris Pasternak which was refused publication in the USSR and consequently first published in 1957 in Italy, where the manuscript had been smuggled, this film adaptation begins with a Soviet general (Alec Guiness) searching for the daughter of his late poet half-brother, one of whose published works contains a poem about -- and a photo of -- the great love of his life.  A bumper 200 minutes in length, this epic work takes its sweet time to set the scene for its grand romance and not only introduces its audience to a large number of characters but leisurely lays out their backstories in substantial detail -- none more so, of course, than in the case of its titular protagonist.


After his mother's death makes him an orphan, Yuri Zhivago (Omar Sharif) was taken into the family of friends of his mother and brought by them to Moscow, where he led a privileged life and was studying to be a doctor but also was already a published poet.  Although it looked for a time like his future had been mapped out already for him, with a place in high society awaiting him along with marriage to Tonya (Geraldine Chaplin), the lovely daughter of the noble family who had taken him in, Yuri's life is radically changed -- along with those of millions of his countryman and -women -- when Russia enters the First World War and, even more so, by the Russian Revolution.
While serving as an army doctor at the front, he befriends and falls for his nurse, Lara (Julie Christie), despite her being married and a mother to a young girl, and his also being married and the father of a young son.  Entreated by Lara to not make any moves they'll both regret, they part after their services are no longer required at the field hospital they had been working in.  But although Yuri faithfully returns to his family in Moscow, you just know that's not the last time he'll be seeing the bewitching Lara -- and not just because Lara's Theme plays so often in the movie that its romantic tune is one of the things about Doctor Zhivago that even a preteen viewer can never forget!

Two other elements of the film that I remembered all these years was that there were many snow scenes and a long train ride in grim conditions but often through incredibly beautiful scenery.  Seeing Doctor Zhivago more than three decades on, I realize how gorgeous many of the former scenes are and how truly epic that train journey is.  And, actually, "gorgeous" and "epic" could well describe this film as a whole.

At the end of the screening, I walked up to a friend and said, "Now that's what I call a movie!"  We both laughed, so giddy with joy did we feel at having watched a film that felt utterly momentous in scale yet infused with personal emotions at the same time.  Back in 1965, some of Doctor Zhivago's critics accused it of trivializing history.  Watching the movie in 2016, I think it actually made certain historical events in a distant foreign land relatable by showing their effects on people's lives even while showing that life goes on -- and people consequently can love -- even in adverse conditions.

A pleasure to read this review of an older film classic. The last David Lean film I recall you posting here was your glowing review for Lawrence of Arabia. I've been a Lean fan since I first saw his black and white 1940's classics, Great Expectations and Oliver Twist on late night tv as a youth. For me, these are examples of English narrative cinema at its best. I thought he carried over this narrative ability onto the widescreen with Bridge on the River Kwai, my favorite antiwar film.

I think Doctor Zhivago has faults, but there are some powerful scenes. Example: the long train ride to the Urals, which you mention - my favorite scene in the movie. It is interesting that Zhivago received many negative reviews upon release and was doing disappointing business at the box office. Then they released the soundtrack with "Lara's Theme" and the movie became a hit. Audiences have embraced it as a classic love story against the backdrop of revolution.

Really looking forward to reading your review of "Remember" since you gave it a perfect score!

The last David Lean film I saw before "Doctor Zhivago" was indeed "Lawrence of Arabia" -- two Hong Kong International Film Festivals ago. I think these two are my favorite David Lean films. I've seen others, including "The Bridge on the River Kwai" and "A Passage to India" -- but they didn't have as much on an impact on me.

Re "Doctor Zhivago": I actually came away from this screening wishing that "Lara's Theme" hadn't played as often as it did in the movie -- and wondering whether they had stinted on the composing budget for the movie! ;)

Definitely plan to review "Remember". For now, will say that it was so emotionally impacting that I needed to go drink a couple of beers afterwards to stop my heart beating as hard as it did upon coming out of the screening of the film! ;b

May be the hard beating of your heart was due to alcohol withdrawal. Either way, the beers would have helped! ; )

Contrary to some people's belief, I don't drink THAT much alcohol! And if you see "Remember", I'm sure your heart would be beating hard and faster than normal by movie's end! ;b