Trivisa shows what delusion, desire and fury can lead to (film review) 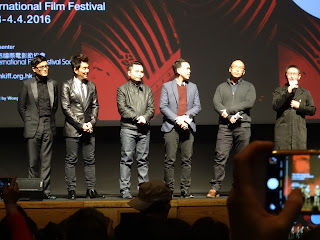 Two of the stars, all three of the directors and one of the producers
of Trivisa attended its Asian premiere at the
Hong Kong International Film Festival last night 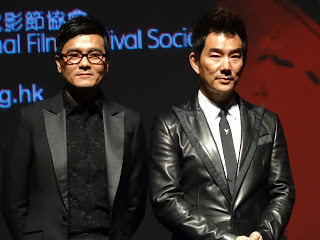 
Until I saw him on stage before the screening of Trivisa at the 40th edition of the Hong Kong International Film Festival yesterday evening, I hadn't realized that co-director Vicky Wong is actually male (rather than female).  And until I read reviews of the crime drama -- which had its world premiere at this year's Berlinale -- by those who I assume had been provided with publicity and explanatory notes for the film, I didn't know that its English title alludes to the Buddhist notion of "three poisons" (delusion, desire and fury) leading to suffering.


Equipped with this knowledge, the viewer can read this Milkyway Image production's implicit, damning message as being that those three toxic emotions have led to Hong Kong being in a less happy position -- particularly in relation to Mainland China -- since July 1, 1997.  Without it, the evocative historical footage that bookends the main body of this cinematic offering which is set in the years and months prior to Hong Kong's Handover can seem incongruous, or quite a bit of a stretch at giving deep political meaning to the at times laughable actions of three very different major underworld figures that, regardless, are very intriguing to watch.


After killing a couple of cops who had stopped him for a random identity card check, Kwai Ching Hung (a menacing Gordon Lam Ka Tung) vanishes off the police radar by assuming the identity of the kind of innocuous fellow you'd fully believe is making a modest living by selling mobile phones.  Meanwhile, fellow "king of thieves", Yip Kwok Foon (Richie Jen), really has given up his machine gun-toting ways to become a "petit bourgoise" businessman hawking such as TV sets and VCD players in Mainland China, albeit with the help of corrupt officials who look the other way so that he and his men can smuggle those electronic wares from Hong Kong over across the border.


In contrast, the flamboyant-acting and -dressing Cheuk Tze Keung (Jordan Chan) thinks nothing of commiting major crimes, including kidnapping a tycoon's son, and openly defying the police; buoyed by the belief that the people he deals with will be too afraid of the consequences to press charges.  But while these three men appear to have very little in common, Cheuk is convinced that if they were to work together, they'd pull of a criminal act for the ages -- and consequently seeks to get in touch with Kwai and Yip, improbably by setting up a phone hotline of sorts and offering lots of money to people to provide him with information as to their whereabouts!


With each of the alternately intriguing, intense and absurdist film's three directors being responsible for telling the story of just one protagonist each, it probably would have worked -- and more easily -- if the three individually interesting tales were told in three separate episodes; and this especially since they also each had different scriptwriters, cinematographers, etc.  Instead, the makers of Trivisa have made them sub-plots in one larger, more ambitious narrative -- and their having ended up fitting so well together to make one mesmerizing whole is a tribute to the filmmaking abilities of not only its three helmers (two of whose first feature film Trivisa is -- and one of whom, Ten Years' Jevons Au, is receiving just his second directorial billing) but also the work's producers (Johnnie To and Yau Nai Hoi) and editors (Allen Leung and David Richardson).


Full of Milkyway Image regulars behind and in front of the camera, Trivisa falls squarely into the Milkway Image crime film oeuvre even while managing to avoid having the stylistic tics that can make certain Johnnie To- and Wai Kai Fai-helmed works feel unnecessarily over the top.  Wonderfully replete with faces that will be familiar to fans of Milkyway Image and other Hong Kong crime movies, this emotionally powerful movie also has provided Jordan Chan with his best film role since the Young and Dangerous series' Chicken, and benefits from another improbably steely performance by singer-actor Richie Jen and spellbinding acting by the increasingly influential Gordon Lam Ka Tung.

"Trivisa" is a good film! Re Milkyway Image movies: my favorites include romantic comedies (e.g., "Needing You...", "Don't Go Breaking My Heart) as well as crime dramas/thrillers (e.g., "A Hero Never Dies", "Expect the Unexpected", "Election"). Actually, if pushed to name my absolute favorite Milkyway Image movie, I think it'd be "Needing You..."! ;b

I see. So what's your favourite Milkyway Image film that is not directed by Johnnie To?

I can't narrow it down to one from Wai Ka Fai's "Too Many Ways to be Number One", Law Wing Cheong's "Hooked On You", and Milkway Image's latest, "Trivisa"! Also, "Expect the Unexpected" technically's directed by Patrick Yau, though there are those who reckon it's really a Johnnie To film...

Wow, "Trivisa" must be really good if you rank it up there with "Too Many Ways to be Number One"!

So is it true that all the Patrick Yau films were in fact directed by Johnnie To?

And I can't say for a fact re Patrick Yau's films having been directed by Johnnie To but I think it says something that he didn't direct another Milkyway Image film after 1998, and that his only other directorial effort after that was 2001's "The Losers' Club".

The director I feel really sorry for though is "Intruder"'s Tsang Kan Cheung. I think that's a good film. But that film remains Milkyway Image's biggest box office disappointment to date, is said to have destroyed the career of Wu Chien Lien, and sometimes is not even included in lists of Milkyway Image films!