The Ngong Ping 360 cable car ride: worth the waiting in line on high visibility days 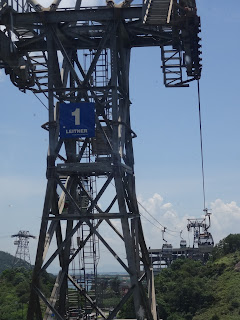 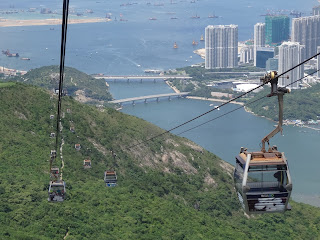 It's fun to spot hikers along the Ngong Ping 360 Rescue Trail from
the cable car, especially if you've hiked that trail yourself before! :b 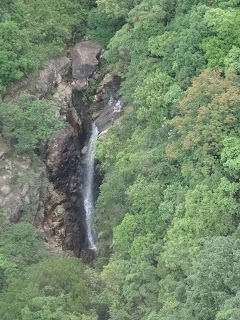 I also reckon it's pretty cool to be able to spot
(seasonal) waterfalls one previously didn't know existed!
Pretty much every time I pass by the Tung Chung station of the Ngong Ping 360 cable car ride, I see long lines for it that mean a wait of at least 30 minutes before people can get on it.  On days when the air's not all that clear, I wonder whether those going on this popular tourist attraction will think it worth their while after they go on it.  But on super high visibility days (like on the two occasions I've been on this cable car ride), I totally understand why people would be so eager to experience the Ngong Ping 360 cable car journey.
For one thing, this 5.7 kilometer-length cable car ride is quite a bit lengthier than many other cable car rides on offer in the region, if not the world.  At the same time, the 25 minutes it takes to complete the journey once you're in a cable car is shorter than the winding bus ride from Tung Chung up to the Ngong Ping plateau that often also requires waiting in line for a while.

Then there are the spectacular views to be had from the Ngong Ping 360 cable cars.  I can imagine visitors to Hong Kong being impressed by how green Hong Kong is revealed to be when going on this ride.  Meanwhile, Hong Kong residents can enjoy seeing familiar landmarks (like Chek Lap Kok airport, Sunset Peak and the Big Buddha) from angles one had previously not done so.  In addition, like I discovered the second time that I went on the ride, one also can spot -- at certain times of the year -- seasonal waterfalls that one previously didn't know existed!
I recently found out from a friend that, at least in 2016, local residents can enjoy a free roundtrip ride in one of Ngong Ping 360's standard (as opposed to glass) cabins on their birthday.  If I am in Hong Kong on my birthday, and if my birthday is a high visibility day, I may be tempted to brave the crowds and take up that offer!  Either that or -- yes, this is something I've latter found out too -- take up Ocean Park's offer of free admission to Hong Kong residents as their birthday treat; though, in all honesty, the latter place is one that I'd much rather visit with a friend whereas I've been perfectly happy to go on the Ngong Ping 360 cable car on my own! ;b
Posted by YTSL at 9:58 PM

Never been on cable car like that. I been on one that was quite old going across a creek.

There seem to be more cable cars in this part of the world than yours. Can't recall going on a cable car in the US besides the one at Disneyland! On the other hand, Hong Kong has two cable cars and have been on a number in Japan in recent years, including over on Shodoshima and in Hakone. :)

If Ropeways are concerned and if you count those being built in Hong Kong's early days but had already been demolished pre-WWII, be it for passengers or for cargo, Hong Kong had had many Roapway systems in various locations. (http://gwulo.com/search/node/ropeway)

Thanks for the historical information. Very interesting! :)