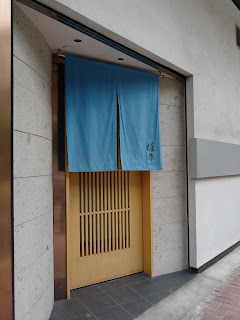 Through this modest door can be found
great omakase meals :) 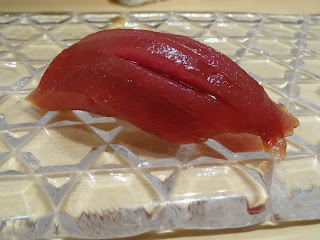 A beautiful slice of akami lies atop a portion
of sushi rice not visible in this photo ;b 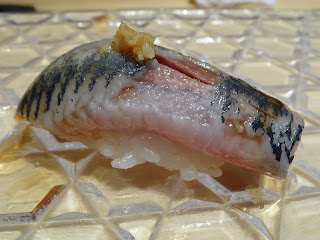 This piece of sushi may not look like much but trust me
when I tell you that it tasted heavenly! :b
Ten years ago, my mother and I waited more than an hour in line to have what turned out to be a life-changing meal at Sushi Dai, a 12-seater sushi-ya at Tokyo's venerable Tsukiji Market.  Not only was it the first time she and I ever had sushi for breakfast but it also was the first time that we had had an omakase sushi meal.
Since that fateful meal, I've actually returned to Sushi Dai a couple of times -- albeit on solo visits to Tokyo, and despite the restaurant's increasing fame having resulted in even longer waits in line!  I've also had "trust the chef" meals at a few sushi-ya in Hong Kong -- all of which charge quite a bit more than Sushi Dai -- including at one where dinner is omakase only, as I found out to my shock the first time I went there with a friend.
Located in a quiet part of Causeway Bay close to Tai Hang, Uehara is one of those restaurants which one could easily walk by without realizing what wonderful meals are to be had within.  Understated on the outside, it's on the small but comfortable side inside: with a maximum of around 14 seats in the house; the majority of which are located at the counter, where one can watch restaurant owner-head chef Takahiro Uehara and his assistants preparing the food.
Like at Sake Bar Ginn and Godenya, there's a distinctly Japanese feel to the place; even on evenings when the clientele is not predominantly Japanese (like when my mother and I went on Friday evening -- and conversations could be heard being conducted in English, Cantonese and Korean as well as Japanese by the multi-lingual Uehara-san!).  And unlike the sushi shown being served at the Osaka Restaurant in East Side Sushi, what's served at Uehara wouldn't be out of place in a quality sushi-ya located in the Land of the Rising Sun itself.
As is to be expected of any self-respecting sushi-ya, omakase meals actually don't consist solely of sushi.  Rather, before the sushi part of the meal begins, one gets served slices of sashimi (including, as was the case on Friday, tori gai (heart clam) that was so fresh it still moved on the plate!) and  small dishes (like the one of hotaru ika (firefly squid) in ponzu, and another delectable one of abalone chawan mushi that we had on our most recent visit to Uehara).

At a high end sushi-ya like Uehara, the move to the sushi part of the meal is signalled by slices of ginger being placed on our plates and a little piece of wet cloth being placed on the table (to use if you opt to eat the sushi with your hand rather than chopsticks).  While my mother breathed a sigh of relief that we were moving to that stage of of our dinner (she was afraid she'd get so full she'd have to prematurely call a halt to our meal!), I let out a sigh of regret -- because it meant that our very enjoyable meal was at least half over!
As was the case with the delicious sashimi, and also that revelatory first omakase meal at Sushi Dai one decade ago now, the sushi offered up on Friday included some new ingredients I had previously never eaten before (or eaten prepared as sushi, in the case of hokke (Okhotsk Atka mackerel)).  At the same time, there were some old favorites I was happy to see and devour, like uni (sea urchin) and o-toro (fatty tuna), before our meal came to an end with a comforting bowl of miso soup and a sublime dessert of Hokkaido milk cheesecake topped with ume (preserved plum) sauce.

In case it's not obvious: Uehara is my favorite place to go for omakase sushi (and sashimi, etc.) meals in Hong Kong -- and whenever my mother visits these days, we make sure to go have dinner there.  And for the record: so highly does my mother rate this restaurant that she named our dinner there this Friday along with the Orquesta Buena Vista Social Club concert we went to on her birthday the evening before as the two highlights of her most recent visit to the Big Lychee! :b
Posted by YTSL at 10:52 PM