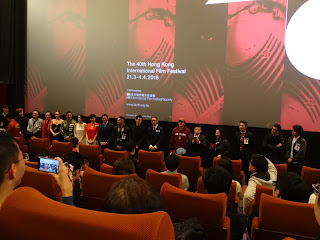 A large number of cast members turned up for the world premiere
of The Mobfathers at the Hong Kong International Film Festival! 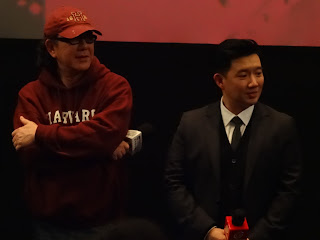 
After the disaster that was Nessun Dorma the previous evening, I wondered what I was getting into by going to watch a second Herman Yau movie in two days.  And my trepidation increased upon discovering that not only was the film's director again not being present for its world premiere but that the also Category III-rated The Mobfathers shared the same principal scriptwriter (Erica Li), cinematographer (Joe Chan), editor (Azrael Chung) and music composer (Mak Chun Hung, AKA Brother Hung) as the exploitation flick!


Things began looked up though when lead actor-producer Chapman To read a long message from director Yau to the audience; one that referenced Hong Kong's current political situation (which has seen the likes of To and fellow cast member Anthony Wong Chau Sang put on a Mainland Chinese blacklist of Umbrella Movement supporters) and discussed how it had informed certain of the plotlines of this triad drama which, like Johnnie To's Election (2005), sees gangsters bidding to win a contest for a top underworld position that is voting upon.


The distinct feeling that this HK Film Company offering is closer to Yau's heart is matched, if not surpassed, by the sense that for many of the crew and cast, this being a Hong Kong film rather than co-production with Mainland China allowed as well as compelled them to do much more than they otherwise could or would.  Among other things, the squeamish should take note that the violence shown is of the kind that can cause such as the woman seated to my left at the screening to turn away from the screen in horror and curl up in a fetal position!  In addition, there are a number of lines as well as visuals that surely would not pass the Mainland Chinese censors.


Never one to shy away from controversy, Chapman To puts in a full-blooded performance in The Mobfathers as Chat (Seven in the Chinese subtitles; Chuck in the English ones!), a gangster in the thick of a bloody battle when his ex-model wife (Bonnie Xian) finds out that she's pregnant, and encarcerated at Stanley Prison for the first five years of his young son's life.  The first night out of jail, he has sex with a fortune-telling seductress who fills him with ambition to become his gang's power-wielding Dragon Head.


In order to turn his dream into reality, Chat first has to win the approval of the Godfather (a menacingly growly-voiced Anthony Wong Chau Sang) and his elderly cohort of Uncles who determine who are the nominees for the contest.  Actually, while he was in prison, they already had decided that this year's nominees would be Luke (Philip Keung), Chat's lieutanant and the fellow who had looked after his family as well as his men while Chat was in prison, and Wulf (Gregory Wong), a pretty boy police informant turned genuine gangster.  But after Luke readily agrees to step down in favor of Chat, who had saved his life in the same fight that had resulted in Chat going to jail, the path is cleared for Chat to directly compete with Wulf for the Dragon Head position.


Initially, Chat seeks to make an impression and gain favors in traditional ways such as showing his fight prowess and bribery.  But what with his being a colorful Chapman To character, less orthodox ways to win votes also end up getting enacted.  In addition, with this entertaining entertainment personality in the equation, you just know that there's going to be some funny scenes in the movie.


For all the comedy, family scenes and political references that get thrown into the mix though, there's no question that The Mobfathers is first and foremost a triad drama.  Still, rather than glorify the gangsters, it shows how rotten the underworld is -- albeit while also pointing out that there is the rare triad fellow with a conscience and heart, and that the "good guys" are definitely not as clean as we would want for them to be either.

This film's trailer looks incredibly violent and has rather a lot of swearing!

Are the violence and foul language in the film excessive?

Will you be writing a review for "Chungking Express" after seeing it on the big screen?

Don't think I'll write a new review of it as I'm pretty happy with the one I wrote for "Hong Kong Cinema: View from the Brooklyn Bridge" even though it's over 10 years old now:-
http://www.brns.com/pages/wkwai2.html

I really don't keep up that well with current Hong Kong cinema, but Herman Yau is a director who interests me. Not all of his films are available on dvd here in North America...After reading your reviews of his current films, I rewatched my copy of The Woman Knight of Mirror Lake. I think this movie proves that if you give this director a decent budget, script, and a good leading actress - Yau can make an exceptional film with universal appeal.

What surprises me is his output of Cat III features. I don't own copies of any of them, but they have been posted on You Tube. One of them, The Ebola Syndrome, was sickening to watch, and I had to turn it off. Although no woman or man is safe from being butchered in these type of movies, Lau's violence seems especially directed at women. It seems this director wants to bring viewers into his world of violent misonginistic voyeurism.

I've not seen "The Ebola Syndrome" but I've seen the likes of "The Untold Story" and "Taxi Hunter". Based on them (and the rest of Yau's output), I would not think his world to be particularly misogynistic.

Misogyny is a label I've seen and heard a number of Hong Kong directors get labelled with -- and often times, I think it's unfair. I think what often happens is that many Western viewers are unused to seeing the "equal opportunity" violence that happens in Hong Kong movies, so seeing violence against women and children consequently affects them more than violence against adult males.

Something to bear in mind is that often in Hong Kong (and other Asian cinema), violence is shown being inflicted on members of a main character's family to underscore a villain's nastiness -- and also because in traditional Asian society, one often has to bear in mind that the repercussions of one's actions often involve family members rather than just the individual him- (or her-)self.