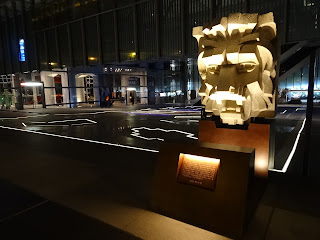 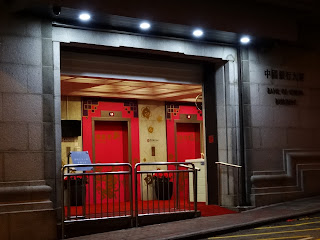 Don't these entrances to the Old Bank of China Building
look enticing? 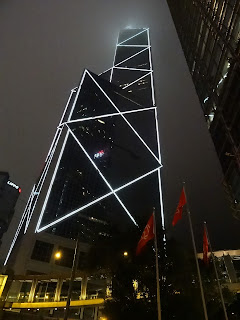 The Bank of China Tower designed by I.M. Pei
may not be the tallest building in Hong Kong any more
but it's still a very impressive local landmark

"None of you live anywhere on the map!"  That was what an American friend who relied on a tourist map while visiting Hong Kong exclaimed when two of our mutual friends who live here and I told him where we actually reside.  (And for the record: it's not as if we're living out in the boonies either!)

On a related note: when an American acquintance who was thinking of moving to the Big Lychee asked me how different living in Hong Kong was compared to visiting it, I told him that most Hong Kongers live and work in those parts of the Big Lychee which don't appear in detail on the tourist maps given to, and used by, tourists visiting this part of the world!  A case in point: the Central District may be so called -- and appears to be, well, pretty central on Hong Kong maps -- but a fair amount of the local populace of Hong Kong doesn't work, live or play there.

But while I -- who nonetheless do reside in a pretty high density part of the Big Lychee -- neither work nor live there, it's true enough that my favorite sake bar is located in that area along with a few eateries.  Consequently, I am occasionally in the area after dark -- and after dinner on one of those evenings, I decided to stroll around and take some pictures which, I think, show a different view of the area from the usual ones that are seen and photographed: after which my conclusion is that after dark, certain familiar landmarks can look more attractive and enticing even while others look more intimidatingly impressive.

At the same time, I was struck once more by how safe (as in crime free) it felt to stroll about the streets of Hong Kong's Central District -- and beyond -- late at night.  And after having lived in parts of the world where this is not the case (e.g., Philadelphia, where I rarely ventured out at night by myself), I truly can appreciate how wonderful this is! :)
Posted by YTSL at 11:59 PM

Our bank building don't even come that close.
Coffee is on

I like the crimson red entrances to the Old Bank of China Building. So Chinese. :D

Glad to hear that HK is still safe at night, thinking of going for a visit some time soon.

I don't think there are many cities with bank buildings like Hong Kong's... ;)

As someone who has been out past 3am here in Hong Kong, I can vouch for it feeling pretty safe at night. And BTW, buses were running, so I had no problems getting home even that late! ;)