A Tokushima-themed dining (and drinking) experience in Hong Kong 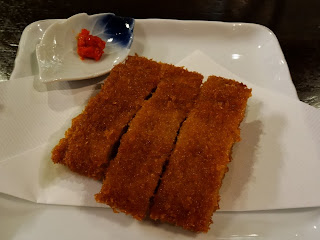 Food that would go great with beer! ;b 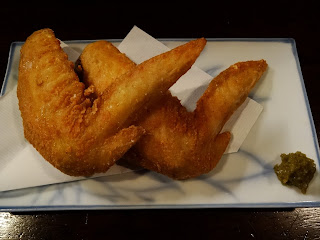 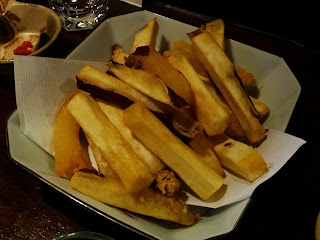 Tasty sweet potato fries from Tokushima, Japan! ;b
As regular readers of this blog know, last year I spent my birthday last year in sanuki udon country -- i.e., the Japanese island of Shikoku's Kagawa Prefecture.  But while I also visited Horyuji, spent time in Uji and revisited old haunts in Osaka like the wonderful Beer Belly, I didn't make it to any of Shikoku's other prefectures on that trip.
I never did do such as go to Tokushima Prefecture -- located to the east of Kagawa -- to sample its regional specialties though.  But as luck would have it, a few weeks ago, Sake Bar Ginn co-hosted a Tokushima Night with the Tokushima Government office, during which food as well as sake from that Shikoku Prefecture were served.
Although all the Tokushima sake served that night came from just one brewery, Honke Matsuura Brewery's Narutotai range was pretty broad, including as it did a junmai daiginjo and also a genshu (the latter of which, unusually for a quality sake, comes in a can rather than bottle!).  As for the food on offer that evening: I think it safe to say that while some of it (e.g., the Handa somen served cold and topped with sudachi) conform to the stereotype of Japanese food as healthy fare, some of the other dishes were of the fried variety and the kind of taste that made you think that it's probably not so good for you!
Probably my favorite dish of the night was the komatsushima, a breaded fish cutlet named after a port-city in Tokushima Prefecture whose inside seemed like a close cousin, both texture- and taste-wise of the Hong Kong fishball latterly made (in)famous by the recent "fishball revolution".  Although I drank sake while eating it that evening, I totally could see this fish snack being great beer food!

A Japanese friend seated next to me got pretty excited when seeing Awa Odori chicken wings and Naruto Kintoki sweet potatoes on the menu.  Not being familiar with these products, I was surprised -- shocked even -- when I saw how much larger than normal the fried Awa Odori chicken wings we were served were and definitely impressed with the sweetness of the Naruto Kintoki sweet potato fries (described as tempura on the menu but came minus the batter I expect to see on tempura items), which tasted great with just a little bit of sea salt scattered on them.
Those three fried dishes confirmed two things to me about Japanese food.  Firstly, not all Japanese food is super healthy fare (probably the second most widespread myth about Japanese food after the belief that all Japanese food is served raw!).  Secondly, so much Japanese food really does go great with alcohol!  Hence it being so that Japanese cuisine is one of those which I think is best enjoyed with either nihonshu or beer, or sometimes both in the same evening. ;b
Posted by YTSL at 10:39 PM