Not your usual Victoria Harbour sights on a super foggy day! 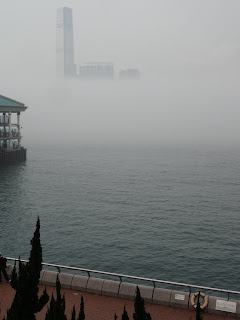 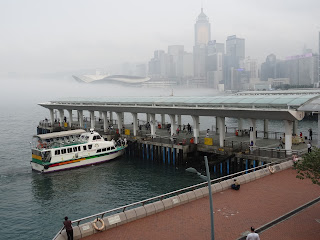 Fog rolling in from Victoria Harbour to partially obscure
sections of some of the buildings next to it
"I don't want a sea view."  When I told property agents this years ago when I was looking for a flat to move into, they often looked surprised or assumed that what I was implicitly saying was that I wanted cheaper options (since views of Victoria Harbour and/or its neighboring bodies of water are premium flat features in the eyes of many Hong Kongers).
Actually though, as I explained to those who asked why this was so, this was because I had experienced too many days with air so polluted that one couldn't see across to the other side of Victoria Harbour.  And, in all honesty, I could imagine that sight depressing me so much that I'd not want to leave my apartment, or even the bed, if I were to come across it first thing in the morning!
Put another way: one of the few things I really dislike about Hong Kong is the air pollution that makes me unable to take beautifully high visibility days for granted.  And when I saw such as the top of the International Commercial Centre look like it was floating in midair and heard the sound of multiple foghorns blasting away when I was walking near the Central Ferry Piers this afternoon, my initial reaction was to fear that I was breathing super polluted air once more.
Upon looking closer though, I realized that the low visibility actually was being caused by low-lying clouds rolling in from Victoria Harbour onto the land on both sides of it.  And while I have to say that I wouldn't have felt that good if I had been on a ferry or another boat sailing in the harbor or the waters surrounding it that afternoon, I -- who had her feet firmly on shore -- did indeed feel able to breathe a sigh of relief as well as enjoy the pretty unusual foggy sights! ;b
Posted by YTSL at 10:10 PM

Being stuck in the mountains of North Idaho there no Harbour. But we do have some pretty Mountain lakes.
Coffee is on

For most of my life, I've lived not too far from the coast. About the only time when I was a great distance from the sea was when I went to college in Wisconsin. I can't say though that I missed being near a body of sea water that much then. On the other hand, I really did miss living within sight of some real hills! ;)

One thing I love to see in the morning when driving to work is fog on the road ahead or mist rising from the lake. Sometimes the mountains are covered with clouds but that is less usual. I wish we had fog horns here as they remind me of the ocean around Cape Cod. Good photos.

Woah re the thought of your driving to work while there's fog on the road ahead or mist rising from the lake -- that sounds dangerous! Please take care (even while also enjoying the sights)!