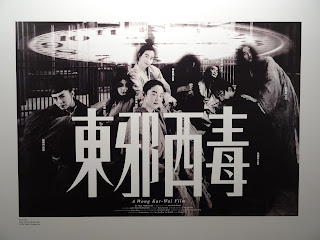 An early Hong Kong poster for Ashes of Time 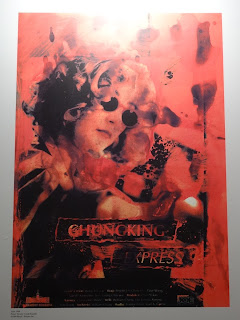 Before anything else: no, this isn't an April Fool's joke.  Rather, the above photos are of a couple of posters that were on display at the Hong Kong Cultural Centre last week that coincided with the Hong Kong International Film Festival's poster exhibition to commemorate Jet Tone Films' 25th anniversary.

Chungking Express and the redux version of Ashes of Time are among the movies produced by Wong Kar Wai's film company showing at the 40th HKIFF.  While I jumped at the chance to see Chungking Express on a big screen for the first time, I eschewed the opportunity to view Ashes of Time one more time on the silver screen even though the latter's actually my favorite Wong Kar Wai film of all.

My reason: because the HKIFF had programmed screenings of Ashes of Time Redux and The Eagle Shooting Heroes back-to-back, I had never seen the zany Chinese New Year comedy featuring many of the same stars as the desert epic on a big screen before and consequently prioritized doing so that evening, and figured that seeing those two vastly different films one after the another would cause my head to explode!

As it was, seeing the likes of Leslie Cheung, Brigitte Lin Ching Hsia, Tony Leung Chiu Wai, Carina Lau, Tony Leung Kar Fai, Jacky Cheung, Maggie Cheung Man Yuk, Joey Wong and Veronica Yip cavorting about merrily and enjoyably over-acting on a big screen was about as much excitement as I could take that evening.  Don't get me wrong: it was incredibly fun -- but also mindboggling to see how these stars, many of them among Hong Kong cinema's brightest luminaries, seemed so willing to take on roles that make fun of their regular onscreen persona (I think particularly of Brigitte Lin) and look physically bad (I think particularly here of Tony Leung Chiu Wai's sausage lips in this film).

Perhaps it was a way to let off steam in between filming the taxing Ashes of Time -- which not only took two years to complete but, along the way, lost Joey Wong (who features so prominently from its cast and added on Charlie Yeung.  And speaking of loss: of course, one can't but watch films with Leslie Cheung in it, especially so close to his death anniversary, and not feel sad that he decided to take his own life 13 years ago now.

Unlike some recent years, I won't be viewing a film with Leslie Cheung in it on April 1st this year.  But, of course, it's hard to live in Hong Kong and not think of the late Hong Kong superstar on this day -- and wish he had managed to get even half as much joy from watching his films and listening to his music as the likes of me have done over the years.
Posted by YTSL at 11:45 AM

I too miss Leslie Cheung, his music and movies dearly. So YTSL, what is your favourite Leslie Cheung movie? Mine is "Days of Being Wild". I am guessing yours would be "He's a Woman, She's a Man". Am I right? : )

I think it's recently been re-released on DVD, actually. I posted a link last night but my comment didn't get published. Drop me an email if you want the link! : )

Strange: that comment didn't even go into my junk folder. So it wasn't me who decided against publishing it! And okay, I'll drop you an email because I'd like to know more about that DVD...

The ability of HK actors back then and I expect today to go from serious films to madcap ones in the blink of an eye is part of why we loved so many of them.

Well, the likes of "Big" Tony Leung Ka Fai and Carina Lau are still around... did you ever catch them in fun mode in "Beijing Love Story", by the way? On the other hand, think "Little" Tony Leung Chiu Wai and Maggie Cheung are overdue to appear in comedy roles once more...

... and I've pretty much given up on ever seeing Brigitte the Great appear in a new film now -- and worse, have a feeling that if she ever did appear in a new movie, I'd not like it! So I'll "just" content myself with seeing her in beloved old movies... like "Peking Opera Blues", which I'll be catching a screening of at the Hong Kong Film Archive this Sunday! :b