Living it up with the Orquesta Buena Vista Social Club! :) 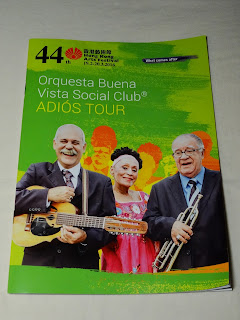 
Back when I was still living in Philadelphia, I came across a documentary about a group of Cuban musicians who didn't let age get in their way of their being able to make beautiful music together.  Ry Cooder's The Buena Vista Social Club gave me one of my first tastes of traditional Cuban music as well as my first views of a country which, for a time, Malaysians were barred from travelling to.


I've yet to make my way to Cuba despite the travel ban having been lifted.  But since moving to Hong Kong, I've had the good fortune of attending concerts featuring members of the Buena Vista Social Club: the first time some years back; and the second time earlier this evening, on the first night of the Hong Kong leg of the Orquesta Buena Vista Social Club's Adios Tour.


Early on in the concert, it seemed like the focus would be on saying "Adios" and paying tribute to former band members who've left the realm of the living.  Although the music played was actually not always sad, it did seem for a while like things were getting on the morbid side.  And it wasn't until 85-year-old lead vocalist Omara Portuondo belatedly took the stage a few songs into the show that things perked up... considerably!


Led on to the stage on the arms of pianist Rolando Luna, I worried for a bit that the octogenerian singer would now be frail of voice and in general.  But Portuondo soon blew away any doubts anyone had of her lacking the ability or spirit not only to sing strongly and beautifully but also to absolutely command the stage and get the audience eating out of her hand.


Like Portuondo, Barbarito Torres -- who plays the laúd, a Cuban variation on the traditional Spanish lute -- also is perfectly able to enthrall even while giving the impression that he's having a lot of fun on stage.  His nimble fingers produced sweet music all evening, and to top it all, he proceeded to show his prowess at playing his musical instrument of choice when it was being held behind his back (by a fellow band member)!


Last year, a friend and I went to hear Grammy Award winner Cassandra Wilson perform at the Hong Kong Arts Festival -- and came away disappointed, not least because that concert's headline star didn't seem to care all that much about satisfying her Hong Kong audience. Tonight, in contrast, one came away with the impression that the members of the Orquesta Buena Vista Social Club were determined to give the audience a good time, and actually had a great time doing so.  Put another way: the Orquesta Buena Vista Social Club had tonight's audience standing up and bopping about as well as happily giving the wonderfully game as well as talented musicians a thoroughly deserved standing ovation.


With two octogenarians in the ensemble, it would be understandable if the ensemble hadn't come out for encores.  But, of course, they did -- and that which produced the experience of the audience and the musicians singing Guantanamera together is one memory I hope the Cubans on stage as well as this evening's multinational audience at the Hong Kong Cultural Centre's Concert Hall will happily remember for some time to come.
Posted by YTSL at 11:59 PM

Imagine what a treat it was to hear Ibrahim Ferrer duet with Omara Portuondo live... On a more positive note: I'm so glad that the members of the Buena Vista Social Club have got the worldwide respect, admiration and adoration they so deserve.

Silencio was among my favourites. This one as well (https://www.youtube.com/watch?v=PI3ro8ZE2M8) despite it only appeared in the solo Album of the Great Ruben Gonzalez.

You sound like a big fan! Hope you were able to catch the Orquesta Buena Vista Social Club performing here in Hong Kong!