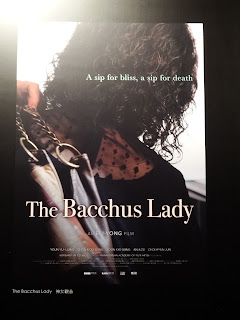 The Bacchus Lady's poster hints at it
being a dark offering 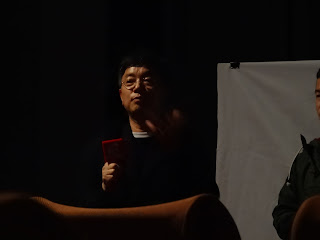 
As I made my way to attend the Asian premiere of E J-Yong's The Bacchus Lady, I received a text from a friend who had been at the same screening of Doctor Zhivago earlier that day as me.  In it, he expressed his happiness at being able to float on the cloud of enchantment that the experience of viewing the David Lean film had put him on for the rest of the evening since he wasn't attending another Hong Kong International Film Festival screening until at least the next day.


Although I knew how he felt, I already had committed to checking out this other HKIFF offering which I knew would be quite different from David Lean's romantic epic; not least because it's a Category III-rated contemporary South Korean drama about a so-called Bacchus Lady -- elderly prostitutes who approach elderly men in public parks in Seoul and ask them if they wish to purchase a bottle of Bacchus energy drink -- by the director-scriptwriter whose filmography includes Untold Scandal, the Korean film adaptation of Les Liasons Dangereuses.


Existing on the unglamorous -- and surprisingly multicultural -- fringes of South Korean society, 65-year-old So Young (Youn Yuh Jong) ekes out a living offering sexual services to men around her age or even older, many of them lonely -- rather than particularly randy -- widowers and retirees who get no love from their remaining family members, children and grandchildren alike.  Prone to catching gonorrhea from customers as well as needing to stay alert to avoid being arrested by the police, she and her fellow Bacchus Ladies nonetheless advertise their wares in broad daylight in public venues such as the park next to the UNESCO World Heritage-listed Jongmyo Shrine.


As scandalous as her life sounds, E J-Yong actually makes it look down-to-earth and quietly desperate.  Similarly, although So Young's neighbors have more unusual traits than most, The Bacchus Lady actually depicts one-legged figurine maker Do Hoon (Yoon Kye Sang) and transgender nightclub singer Tina (An A Zu) as acting much like regular folks who love a good feast and, even while given to slinging barbs at one another, often willing to be there to help out when called upon to do so.

Ironically, when trouble comes into So Young's life, it stems from impulsive acts of kindness on her part -- be they towards a "Kopino" boy (Choi Hyun Jun) whose Filipina mother is arrested by the police after she stabs her Korean doctor lover or elderly men who had been among So Young's regular customers before being beset by the kind of serious ailments that come with increased age; with the latter involving her turning from giver of sexual satisfaction to someone who helps to take lives!


Again, rather than play up these actions, E J-Yong opts to go for a nuanced depiction which  underscores how normal it can seem for people in certain unhappy situations to want to die rather than go on living.  Much more damning is The Bacchus Lady showing that these elderly souls' situations now look to be common, even widespread, in South Korea: the result not only of medical "developments" having prolonged life without necessarily improving, or even maintaining, its quality but also of socio-cultural changes having made it so that the elderly now tend to live alone rather than in extended households, as traditionally was the case.


Even though The Bacchus Lady is less than two hours long and moves along at a pace that one would associate more with seniors than younger folk, it manages to pack in commentary on a lot of variety of weighty issues, in ways that often are far from heavy-handed.  A mature, adult film in the very best sense, it benefits immensely from adept helming, and a bravura as well as brave performance by its veteran lead actress.