The things people do on Shek O Beach! ;b 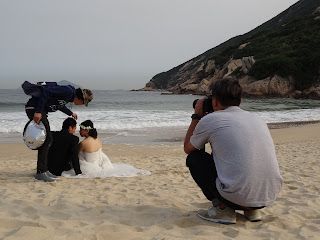 How far will people go to take seaside wedding photos? 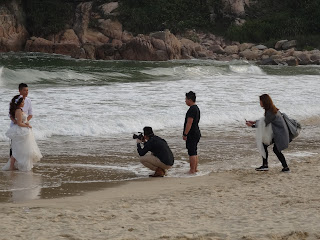 In the case of this couple, it appears to be the water's edge
over at Shek O Beach! ;b
Today was one of those rare rainless Sundays where I didn't go hiking even while I was in Hong Kong.  This is on account of my mother having arrived yesterday for a visit and her hiking days being over, alas.  Still, rather than opt to stay indoors in the city, we headed over to enjoy the breeze -- and sight and sound of the waves -- over at Shek O Beach.
After having borne witness to how dirty some beaches in Hong Kong can be, it was a great relief to find that the beach at Shek O is actually pretty clean.  Also, as my mother remarked, the sand is really fine and lovely, unlike those she's been on in, say, Bournemouth over on the south coast of England.  (I totally know what she means, having seen the pebbly beach of Brighton and a beach up in the Lake District whose "sand" felt more like mud to me!)
With today's afternoon temperatures being in the low 20s (on the Celsius scale) and the sun shining (but not so brightly as to make you feel like you'd burn within minutes), it was pretty ideal weather as far as we were concerned to lie on my Hello Kitty beach towels (my mother on the Hawaii-themed one that a friend bought me; and me on the Hello Kitty in Oz-themed beach towel that I bought for myself!) and snooze for a bit!
Of course we also chatted while we hung out, and had fun people watching; what with there being plenty of people about and there being swimmers, surfers, kite flyers, people playing volleyball and a number of other active sorts around.  In addition, we couldn't help but gawk at -- and be amused by -- the antics of not just one but two couples having their wedding photos taken on the beach at Shek O that afternoon!
In a previous blog post, I had mentioned that -- and yes, I'm about to quote myself -- " I now realize that some couples are willing to do things like lie down on the water's edge at a beach in order to have some unusual photos to celebrate their impending marriage".  And today, I'm providing proof of how some Hong Kongers really don't seem to think it strange at all to have their wedding photos taken at the seaside, with the bride- and groom-to-be both not seeming to mind that their formal wedding costumes are liable to get wet or covered with sand in the process! ;b
Posted by YTSL at 11:46 PM

Looks like a beautiful beach. Funny about the wedding shots.

It's indeed a beautiful beach -- and large enough to not overly crowded even when there are lots of people (including those posing for wedding pictures ;b) on it. :)