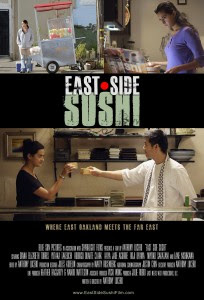 Expect to see California rolls in this
California-based movie ;b


Before anything else: let's be clear that this is not a film for sushi purists.  If the fact that there are no Japanese people among East Side Sushi's key crew members (i.e., director, scriptwriter and producers) eludes you, consider that this food-themed drama's story centres on a Latina East Oakland resident who is much more at ease speaking Spanish and English than Japanese, and begins the movie manning a fruit cart.

Working class single mom Juana (Diana Elizabeth Torres) takes pride in making good food and has worked in taquerias and even an Italian restaurant.  But she's working as a cleaner at a gym when she passes by a Japanese restaurant with a "help wanted" sign in its window and decides to apply to be one of its kitchen assistants.
Initially, Juana is a fish out of water at the Osaka Restaurant owned and operated by the martinet-like Mr. Yoshida (Roji Oyama).  But with the help and encouragement of head sushi chef Aki (Yutaka Takeuchi), she not only learns to appreciate eating sushi but also gets to aspiring to master preparing this popular type of Japanese food as well; regularly using her father (Rodrigo Duarte Clark) and young daughter Lydia (Kaya Jade Aguirre) as guinea pigs for the sushi she makes after hours at home.

One year passes by quickly and Juana appears happy at the restaurant.  But few people take her seriously when she states her determination to become a sushi chef -- not because she lacks talent in the kitchen but because, well, sushi chefs traditionally have been Japanese and male.

Something else that isn't explicitly stated in the movie is that it usually takes years of training under sushi chefs before one can join their ranks.  And I have to admit to feeling a bit miffed that the expertise required before one can become a genuinely good sushi chef looks to be under-emphasized in this film.  And while I'm being nitpicky: I have little doubt that in reality, someone like Mr. Yoshida also would refuse to employ someone as a sushi chef if that person smoked (as was the case for one of the sushi chefs working at the Osaka Restaurant).

On the other hand, East Side Sushi is a film that's not only set in the USA (as opposed to Japan) but also in a culinary environment where California rolls, spicy tuna rolls, dragon rolls and other non-traditional sushi options are regular items on the menu, people (restaurant staff and customers) call the lean tuna maguro (rather than akami) in Japanese, etcetera.  In short: we're talking about a part of the world where creativity often is valued more than repetition, and innovation is so much a part of what sushi is perceived to be that it could be said to be part of that area's sushi tradition.

Furthermore, this movie happens to have a really likeable heroine in Juana that one will find very hard to not want to root for when she sets her heart on accomplishing something that would ultimately benefit not only her but her beloved daughter and father as well.  So even while it possesses details that will irritate serious sushi lovers, East Side Story cannot help but move and surely will have its viewers finding the way its story turns out to be satisfyingly palatable. :)