Wayne Wang's While the Women are Sleeping is a veritable snoozefest! (film review) 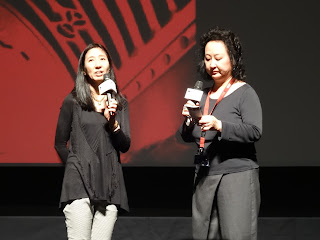 More than once when viewing Hong Kong-born helmer Wayne Wang's Japanese language adaptation of one of Spanish novelist Javier Marias' short stories, I wondered how much had been lost in translation.  At the very least, after reading the English translation of the short story (published in a 2009 issue of the New Yorker), I'm inclined to conclude that scriptwriters Michael Ray, Lee Shin Ho and Mami Sunada moved to make certain elements of the tale more mysterious and hard to fathom as well as sought to flesh out the short story so that there's sufficient content for a full length feature film.

Like its written source, the cinematic version of While the Women are Sleeping tells the story of a hotel guest who is a writer who becomes uncommonly intrigued, obsessed even, with a physically attractive teenaged female and her decades older male companion who, age-wise, could be her father but turns out not to be -- and is revealed to have a puzzling tendency to film the nubile lass while she is sound asleep.

However, the movie's transposes the story to Japan; with the bulk of this psychological drama being set in a luxurious beach resort on the Izu Peninsula.  Additionally, more so than in the written story, a considerable bulk of the film does take place when the young woman, Miki (Shiori Katsuna), and the writer's editor wife, Aya (Sayuri Oyamada), are sleeping but the film's two main male characters, Miki's male companion Sawara (Takeshi Kitano) and novelist Kenji (Hidetoshi Nishijima) are awake.

While sunning themselves by the hotel pool one day, Aya and Kenji notice the odd couple that is Miki and Sawara.  Although Aya it was whose attention was initially caught by the pair, it's Kenji who becomes so interested in figuring them out that he effectively becomes a voyeur who does such as resort to tailing them as they walk around in town, and goes and peeks through their window to see what's happening in their hotel room in the middle of the night.

Although this set-up promises to fascinate, the glacial pace and tone that Wayne Wang has opted to give While the Women are Sleeping sent more than one of the viewers at its Hong Kong International Film Festival screening in the cavernous Hong Kong Cultural Centre to sleep!  And I have to admit that having been among those who dozed off a couple a times during the screening!

In the same spirit of honesty: I don't think it was only my having missed a few minutes of the movie while I was sleeping that made the surprisingly un-erotic work appear disjointed at times.  Rather, I blame the problematic editing and the directorial decision to belatedly show that certain scenes which initially play out like the other "real" ones were just dreamnt up or imagined by Kenji.  And while the idea behind the latter's inclusion may have been to help make the overall story more absorbing, my feeling is that it just made plot developments and sub-plots more confusing, murky and, well, boring than they really should and ought to have been.