Among my favorite hiking routes is that which takes one from Wan Chai Gap to Wong Nai Chung Gap along Stage 4 of the Hong Kong Trail.  One beautiful Sunday afternoon however, a friend and I elected to vary things a little by first going down from Wan Chai Gap to the Aberdeen Upper Reservoir, then going along Lady Clementi's Ride before meeting up with the Hong Kong Trail and going along it for a kilometer or so eastwards to Wong Nai Chung Gap.

Although there was a bit of groaning from both of us when ascending a steep flight of vertical steps connecting Lady Clementi's Ride to the Hong Kong Trail, we generally were pretty happy with that day's chosen hike route.  For one thing, it's always pretty cool to go along a trail one had not been on before; this not least since this often results in one getting views from angles one wasn't previously familiarly with.  For another, this turned out to be another of those Hong Kong Island hikes where one's able to appreciate Hong Kong's biodiversity; notably by way of our spotting a large snake swimming in a catchwater and a beautiful skink hanging out in the same area! ;b 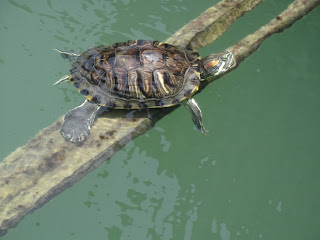 What Hong Kong reservoir doesn't have a tortoise
(or more) that calls it home? ;b 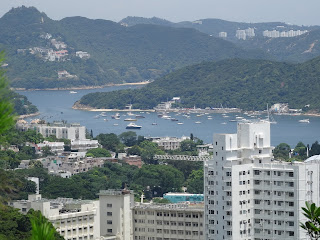 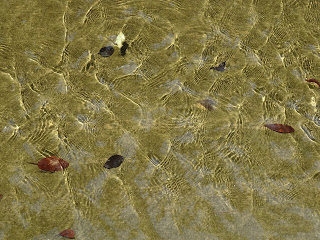 No, there aren't any critters in the above picture --
I just like the play of light and shadows on the water! :) 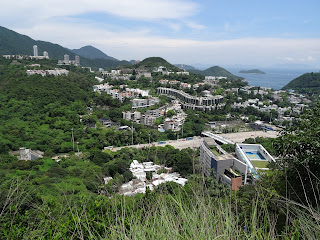 A view of Shoushon Hill and beyond from Lady Clementi's Ride,
and a lower elevation than I normally am used to seeing it 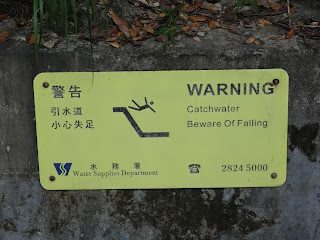 Especially after having seen more than one snake in a catchwater,

I really don't want to fall into these large, deep drains! 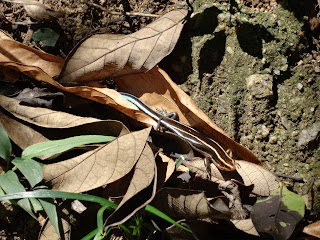 It's amazing to think now that before coming to Hong Kong,

I wasn't aware of the existence of such creatures as skinks! ;b 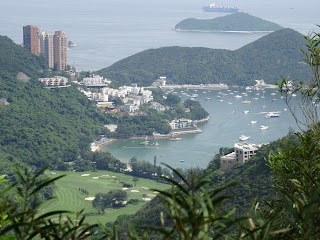 Golf fans will disagree but I often think "what a waste of space"
when I see golf courses, especially those in scenic areas :S 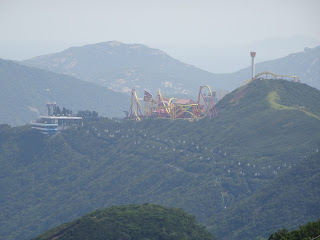 Don't the Ocean Park cable cars look like
bubbles from a distance?
Posted by YTSL at 7:21 PM

Did you go all the way along the catch water? If so, that was not the actual Lady Clementi's Ride. The actual ride branches off into vegetation and is much over grown in the shadows of big trees. I went that way a few times in the past few years and there are bugs. Logs of big spider webs wide enough to block the path. Usually would got covered by strayed sticky strings when I reached the steps.

No, we didn't go all the way along the catchwater. And yes, I'd concur that parts of Lady Clementi's Ride are overgrown and provide opportunities for plenty of spider spottings. :)

Hmm the next time I'm in HK I'd check with you if I could tag along with your hiking trips : )

At the very least, you should get in touch with me and we could go to places in Hong Kong you'll find plenty of subjects to photograph! ;)