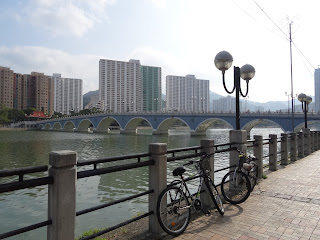 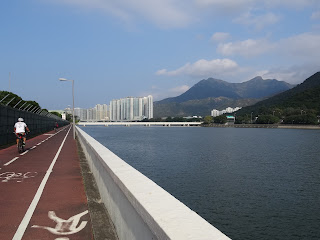 The day I biked from Sha Tin to Wu Kai Sha (and back)
was one with lovely weather and beautiful blue skies :) 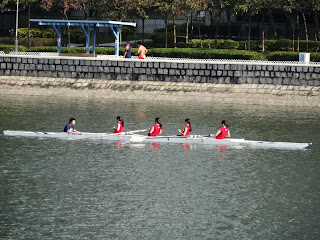 Its water may not be the cleanest in the world
but there are brave souls willing to crew on the
Shing Mun River Channel as well as jog alongside it!


Since I returned from the Netherlands earlier this month, dry, beautiful blue sky days have been few and far between; what with this January not only having had unusually cold days but also being unusually wet.  So when the rare day with dry weather and comfortable temperatures has come along, I've made a point to go outdoors and enjoy the sun and the creature comforts it brings along with it.


As an example, today saw me spending a few hours on a beach in Cheung Chau; and even though it was to do some beach cleaning rather than sunbathing, I did manage to have a good -- and also fulfilling -- time.  Then there was the day a few days after I returned from Amsterdam when, inspired by bicyclists galore I saw in action over in the Netherlands, I decided to go on my first ever bicycle ride in Hong Kong.


Still, once I actually determined to do it,  I found that going and renting a bicycle in Hong Kong isn't all that difficult to do -- and seems quite reasonable too, with the Tai Wai bike shop I rented my mechanical ride from charging HK$70 a day on a weekday (and HK$80 -- i.e., HK$10 more -- on weekends).


From what I've heard, the most popular leisure cycling route in Hong Kong takes one from Tai Wai -- or Sha Tin itself -- northwards to Tai Po.  Rather than go along that 16 kilometer route on my first Hong Kong bike ride, I opted, instead, to go from Tai Wai westwards to Wu Kai Sha -- a shorter route one way, except that I ended up riding there and back again since the bike shop I rented my bicycle from didn't have a branch in Ma On Shan; so ended up riding around 16 kilometers in total!

What with conditions including cool (rather than cold or hot) temperatures and fairly low humidity levels, it really was a very pleasant maiden bicycling outing in Hong Kong for me.  I really enjoyed the breeze that I felt as I peddled away on the bicycle.  At the same time, I also had no compunction in stopping every so often to admire the view, take photos and just enjoy being out on a beautiful day.

As I got to realizing, in certain parts of Hong Kong, there do exist bike paths that are well designed, marked and maintained.  The thing though is that, unlike with the Netherlands, bicycling is considered a leisure activity rather than an actual means of transportation that could actually be preferred to, say, taking a bus, train or tram, or even walking.

I guess the sense among the authorities is that Hong Kong doesn't possess ideal weather conditions for regular bicycling, what with there being a not insignificant amount of rainfall annually.  On the other hand, as I think I am experienced now to say, the Netherlands isn't exactly dry as a desert either -- and yet the bicyclist is most definitely king there (and the country's king being among its millions of cyclists)! ;D
Posted by YTSL at 10:59 PM

Great shots from the bicycle ride in Hong Kong and I also like your shots from the Hague in the previous post. Most people ride bikes for recreation where I live but we have more and more people who cycle for transportation. We have a lot of good routes for people on bicycles at this point but the problem in the triangle area is so many people live in a different town than where they work (Raleigh, Durham and Chapel Hill and the research triangle park). I think some people do cycle to the triangle transit stops for buses.

Thanks for checking out (more than one of) my blog posts! Many people in Hong Kong work quite a distance from home but I think quite a few folks would like the option to bike to work than currently feel able to do so, given the lack of designated bike paths and such in those areas of Hong Kong where office buildings predominate.

The Tai Wai to Tai Po bicycle lane had been there for quite a few decades. The section leading to Ma On Shan is sort of new, but it was there for at least twenty years. There are other side tracks as not all of these tracks go along the shore. Maybe next time you should consider those in-land ones. They are less crowded too. Most of them are inter-connected. If you pay attention to signs or have a map with you, getting lost is close to impossible.

I know those bike lanes are not new. I think one big reason why I took so long to go on them was because I worried about how to go about renting a bike, etc. in the area. I think the next bike ride I want to take is between Tai Po and Tai Mei Tuk -- or even "just" in the Tai Mei Tuk area but including a ride along the Plover Cove Reservoir's main dam. :)

If that is the case you might as well rent your bike at Tai Wai, then ride all the way. There are rental shops that allow customers to return the bikes at Tai Mei Tuk. You just have to find the right rental shop. Just ask around.

I have colleagues doing just that occasionally. They would usually book a vendor for local style BBQ at Tai Mei Tuk after the ride, making it an all day out event. Food at those BBQ places would be mediocre at best.

Might have traffic jams on different sections of the bike lane though, especially on weekends.

How far is Tai Wai to Tai Mei Tuk? I fear that I'll have a sore bum (as well as legs) from biking all that way!

I've gone for BBQ at Tai Mei Tuk before. Unfortunately, did so after a hike, so was ravenous and did not appreciate how slowly it took my food to cook when having a Hong Kong style BBQ! ;(

I have not measured it myself during my previous trips, but this block (http://hkcart.blogspot.hk/2012/04/weekend-cycling-tai-wai-to-tai-mei-tuk.html) mentioned it is roughly around 20 Km. If you are going on a leisure paddling of under 10 Km you should be able to be there in less than half a day under normal circumstances. Like hiking, bring along suitable volume of water and snacks.

When you rent your bike, try to ask for one with a wider seat and see if the shop could accommodate it. That might help a bit. Rent a bike with gears, at least 2 X 7. Preferable 3 X 7. Not necessarily a racing bike. I would prefer a mountain bike instead. Remember to adjust your seat to obtain optimal height.

I might opt for paddling while standing up when going up slopes. Also I would try to remember to put the front portion of my feet onto the paddle instead of putting the middle of my soles onto it, as if you are wearing professional bicycle boots with the connector.

Hope these help a bit.

The impression I get with rental bikes here is that one doesn't get that many options with regards to them. E.g., even getting a lock is difficult, never mind getting such as a wider seat than usual, etc.

Also, although I learnt to ride a bicycle as a kid, I never did ride for long periods at a time. My record thus far is "just" 17 kilometers on the Kibi plain. So I think it's best to go for more conservative distances first before going for the 20km option. On the other hand, it'll be good training for the 60km Shimanami Kaido, which I'd like to go on some day in the not too distant future! :)

If you have already tried a bit short of 20 Km it is just a few Km more. You should be able to get the hang of it in no time.

It's just that there are a bit of going up and down slopes along Ting Kok Road. Otherwise the slopes between Tai Wai and Tai Po are basically those of crossing tunnels only. Not really a big deal. Should be a leisure ride on your own pace anytime safe the inevitable traffic jams on weekends and holidays.

If training is concerning, may I suggest going from Tai Wai to Tai Po, have lunch (maybe a picnic somewhere along the lane for easier to keep an eye on the bikes), then back to Tai Wai. That should also be roughly 20 km.

Yeah, I know 20km shouldn't be too difficult. I just don't want the saddle sore I did for a few days after the 17km ride. But, yes, will have to bite the bullet some time...and it's great to know re the biking options in Hong Kong. :)

I believe they might be available locally at one of those bicycle shops. Or if the price plus shipping from web or mail order is acceptable to you, go for it.

Wow, didn't know something like that existed! I'd invest in it if I became a regular bike rider again. But right now, cycling's just an occasional activity for me.

You might like to take a look next time you are around the SSP MTR astation area.

Thanks much for the tip! It helps to know where to look for those seats and also what they look like.

BTW, I've since gone on another bike ride. Will blog about it soon. :)