If I visited Amsterdam on my own, pretty much the first thing after checking into my hotel would have been to go on a canal boat tour.  But nice person that I am (and yes, I have indeed heard the saying that "self-praise is no praise at all"! ;b) , I waited until my German friend -- with whom I had agree to meet up in the Dutch capital city -- arrived in town to embark on what is one of those "must see" things to do when there.

Although it's undoubtedly a super touristy activity, I definitely can see the allure of canal boat tours -- in that they do provide their passengers with a different view of Amsterdam from that to be had when one's on land.  At the same time though, it's definitely pretty much impossible to miss seeing Amsterdam's canals even when one doesn't take a canal boat tour -- and they can be pretty picturesque when viewed from land, particularly when the annual Amsterdam Light Festival is taking place! :b 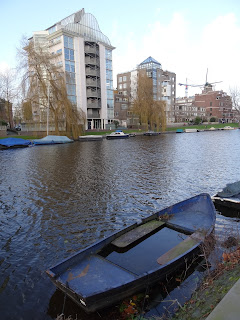 Some buildings along Amsterdam's canals are newer than others,
and some vessels on them are more seaworthy than others! ;b 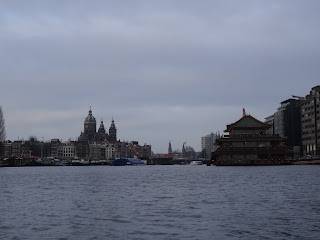 An unexpected sight: a floating Chinese restaurant
amidst other Amsterdam sights! 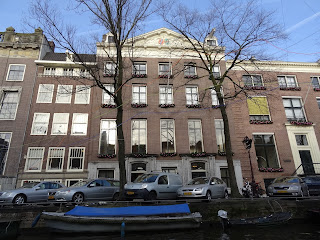 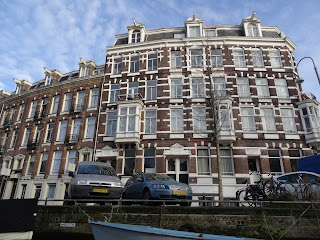 When the sun shines and the sky is blue,
Amsterdam can be very photogenic indeed :) 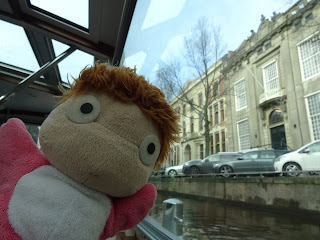 Fans of Puppet Ponyo rest assured: of course
she went along for the canal boat ride with us! ;b 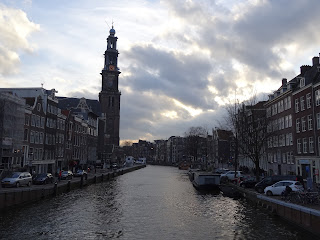 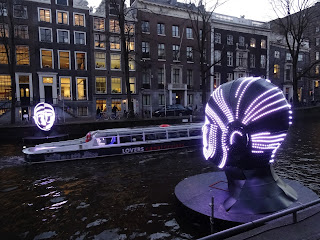 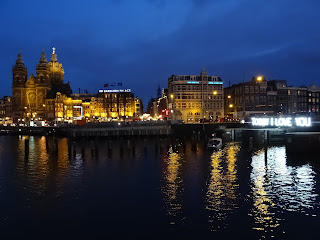 The Light Festival installations are very cool. I enjoy boat rides as you pointed out you see a place from a different perspective than you do walking or riding around. Puppet Ponyo looks like she also enjoyed the ride. In many ways I think she's the perfect companion.

There were some Light Festival installations which didn't work for me but others which definitely did. (More to come in future posts.)

Re Puppet Ponyo: she is a wonderful companion who never demands anything extra as well as never complains -- and when needed, she's ready to make one smile. :)

Your photo of the Talking Heads installation is interesting, especially in fading daylight, when the canals appear transformed into a kind of night art gallery. You capture Ponyo in a pose of her usual travel-elation, which is always enchanting.

On a related note, there is an interesting installation in downtown Calgary by artist Jaume Plensa. You can find it on Google Images by typing in "Wonderland, Calgary".

You got it that the canals looked to have been temporarily transformed into a kind of night art gallery. Some of the art installations worked better than others but overall, it was fun to check them out while in Amsterdam this winter.

And thanks as ever for the Puppet Ponyo appreciation; and also for letting me know about Jaume Plensa's Wonderland, Calgary installation.