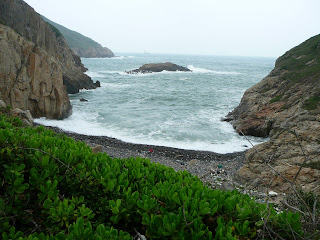 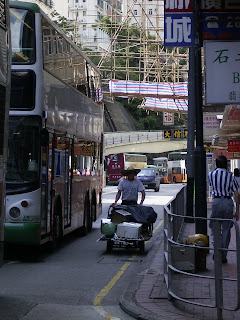 This is one of those Photo Hunts that had me hunting through my photo archives because sorry, but no way was I going out of my way to take photos of garbage! Indeed, I usually take pains to avoid taking photos containing, to quote the Merriam-Webster dictionary, "discarded or useless material.

Much as one would like for it otherwise, however, garbage often is an apparently invariable presence in photos and reality. In the case of the first photo above, it comes in the form of what gets washed ashore onto beaches like this isolated one out on Tung Lung Chau (trans. Eastern Dragon Island), a largely uninhabited island -- that lies east of the much bigger Hong Kong Island -- where garbage is more likely to be "imported" by ocean waves than generated by the tiny local populace.

Over the course of hunting through my photo archive, I also came across a visual reminder of how it is that just as one person's poison is another's meat or pure pleasure, so it can be that one person's garbage can be another's livelihood, if not outright treasure. Thus it is that while Hong Kong, a place with a significantly disproportionate income disparity between the "haves" and "have nots", is often noted for its consumers of luxury and "name brand" items, it's hard not to also be struck while visiting or living here by the presence of people -- usually older folks at that -- who have effectively become scavengers of re-usable or recyclable materials, including discarded electrical items and old cardboard.

On one hand, I feel so sad when seeing people reduced to such (and not being able to live comfortably in what should be their post-retirement years). On the other hand, I feel great admiration for these folks who seem so determined to live independently and not be a burden to others. And yes, both of these emotions only get heightened upon thinking -- as some writings and films I've come across have implied -- that these working men and women may have been the ones who formed the backbone of Hong Kong's economic rise in the late twentieth century and find themselves still having to work to the bone in the twenty-first century (even while more fortunate contemporaries now are able to rest).

This was a very thoughtful piece for the theme. I hope you have a great weekend.

Nice shots and great commentaries.
Perfect for the theme.

Wonderful take on the theme, and I agree that when people reach a certain age they should be allowed to take it easy and rest if they want to. Thanks so much for visiting my entry :)

That's a very nice interpretation of the theme !
to your question about our garbage bags, it's everywhere like this at least in the french speaking part of Belgium. Garbage is a luxury you have to pay for. No wonder that people sometimes get rid of it in woods. But then fines are horrendous !

sadly, not every citizens have the luxury of being able to enjoy their retirement years.

Very profound thoughts for the theme... I was reluctant myself to participate this week because the least I wanted to do was to stare at garbage- but photohunters are very creative!!
Happy PH!

Nice post and entry for the theme. Mine also is up.

Excellent take on the theme and very thought-provoking. It makes me sad when I see people scavenging through trash. You are right, they deserve our admiration for trying to be independent.

An excellent post, YTSL, one to make you think.

An interesting post. I had no idea that older people in Hong Kong could be reduced to scavenging for recyclables! So very sad!

who would want to take garbage pics? that is the first question that played in my mind. it was not easy finding a pic for this one but thanks to my daughter, i have one!

Life is hard for so many, it's a such a shame for these people, that they enjoy a comfortable retirement.

I had to take a photo for this theme, but it is relatively aesthetic. :)
Happy weekend YTSL

Thanks for reading and appreciating -- and hope you have a great weekend too!

Thanks and you're welcome re my visit to your blog! :)

What an interesting thought that "Garbage is a luxury you have to pay for." And I think that if a lot of people were made to think this way, there would be a lot less garbage being created, etc.!

Sad but true: it just seems especially sad to me that some of the people who were hardworking when younger still have to work so hard when old.

I too had some misgivings about this week's Photo Hunt but for the most part, I've seen many interesting, excellent entries... as usual! :)

I'm glad I could do that for you as your posts often do that for me (and/or greatly amuse)! :)

Thanks and hope you have a good weekend too!

Thanks and yep, saw that your post is indeed up! ;)

One of the times I've been saddest in Hong Kong is when I caught sight of two old men quarreling over who had the right to get trash out of a particular trash can. That sight stayed with me a very long time -- and has compelled me to give to charities for the Hong Kong elderly. :S

Thanks for reading and thinking.

Yes, it's one of the saddest elements of Hong Kong society: frankly, Hong Kong is one of those places where it truly is terrible to be poor.

It's interesting what different Photo Hunters have come up with for this week.

We can only hope that these hardworking elders do have some joy in their life -- the way the (younger) likes of us are fortunate to do.

I see garbage as discard things that sometimes can be reuse, so it could be anything

That's the other way of earning a livelihood too. How I wished everyone would be at least decently fed but that's not the way the life mechanism works.

In this economy more of us may be trying to find ways to make do... it is discouraging.
My construction trash or garbage is up.

Interesting take and commentary. I think a few of us gagged at the thought of photographing garbage. But I got over it. ;-)

Yeah, it really is hard to see hard work not getting genuinely rewarded. Thanks -- and I liked your take too. :)

Even before the bad economic times, I saw these elderly workers-scavengers in Hong Kong. I'm afraid this is a long term thing here, actually. But, yeah, the bad economy certainly doesn't help them and others.

When you live or travel near the sea, wave-bourne rubbish is a part of life. So much gets washed up on the shore.

Oh dear, sounds like you get the same in Ireland... :(

A very thoughtful post. It is sad that older people cannot live out their days in some comfort without resorting to this.

Interesting post with much information. I used a definition this week also.

Thanks -- and yes, I agree it's sad indeed. Governments really should do more for the elderly -- especially the elderly who contributed much to society over the course of their lives but remain financially needy in their twilight years.

Thanks -- and can say the same about your post though! :)