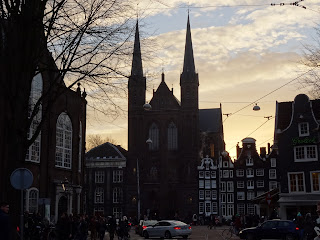 A physically impresive church which wasn't mentioned
in either my German friend's or my Amsterdam guidebooks! 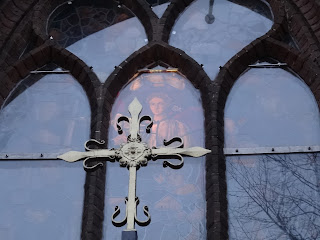 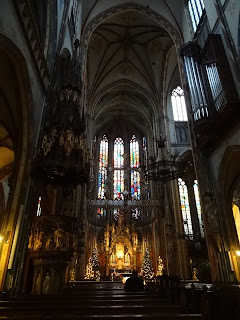 There's much within the church
that catches the eye (too)!
Some five and a half years ago now, I went and spent time in Germany with my German friend who had recently returned to Deutschland after living and working in Hong Kong for a little over seven years.  Eager to show me some of her country's most famous sights, she took me to several cities, villages and towns, including the historic cathedral town of Speyer.
In many of these places, we'd inevitably visit at least one cathedral or church.  And I have to be honest and admit that I got "churched" out fairly early on!  Consequently, on the day that we went to Speyer (where we visited three churches in addition to its UNESCO World Heritage-listed cathedral), I told her that from now on, I was going to limit her to showing me "only" a maximum of three churches and cathedrals a day -- and I can remember this "rule" causing her much stress in Mainz, where there apparently were so many Christian places of worship that she wanted to take me to!
On my second trip to Germany and our first visit to Luxembourg in December 2015, that onus to visit churches and cathedrals remained strong.  So it was with some surprise that I got to realizing that it wasn't until my seventh day in the Netherlands that I visited my first churches and such in that country!
As it turned out, the first two Christian places of worship I visited in Amsterdam were the "hidden church" and English Reformed Church located within the enclosed courtyard of the Begijnhof.  Then, shortly after my German friend, American friend and I left the Beginjhof's confines and I was admiring the late afternoon sky, my gaze was led -- seemingly by divine intervention! -- to an impressive nearby building whose identity was not disclosed in any of our tourist maps or guidebook but turned out to be a church built in 1881 on the grounds of yet another of those "hidden churches" which the Catholics resorted to worshipping in for a time after the Reformation and the founding of the largely Protestant Dutch Republic.

A Jesuit church dedicated to the St Francis Xavier who had done missionary work in several parts of Asia (and whose body was buried for a time in Malacca's St Paul's Church, and some relics remain installed in one of Macau's churches), De Krijtberg stands out from its neighboring buildings, thanks in no small part to its two 55-feet-high towers.  Built in the Neo-Gothic style, it's quite a bit bigger than it looks, due to only one side of its building being visible from the street.  On a related note: its exterior only hints at how impressive its generously decorated interior looks.

Seriously threatened with demolition in the 1970s, De Krijtberg was thankfully restored instead -- with that work finally being completed only in 2001.  I may not be all that religious but I do recognize human artistry.  And this is one of those churches that I'd consider a glorious work of art even while realizing that for some people, it's first and foremost a place of worship.
Posted by YTSL at 6:32 PM