A hike with more than one Boa Vista 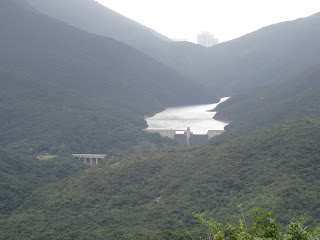 Panoramic view from Boa Vista (and yes, you can click
on the image to view an enlarged version of it) :)

With temperatures having risen to significantly more comfortable levels today from last Sunday and even earlier in the week, my regular hiking buddies declared themselves ready and willing to venture into the Hong Kong countryside this afternoon with me; and this even though today's weather forecast included mention of "rain patches".

As it so happened, not a single drop of rain fell on us on our Tai Tam Country Park hike which took us from Quarry Bay to the Tai Tam Reservoirs via Mount Parker Road and Boa Vista.  And so warm did I feel from my exertions that early on during the hike, I decided that I could take off my sweatshirt and just do with a single T-shirt layer (though it's also true enough that later on in the afternoon, I not only put that sweater back on but also added a windcheater to the clothing equation)!

Then there were the ultra windy conditions we encountered a couple of times during the hike. The first time around, my two friends and I could hear that we were approaching an open area minutes before we actually got there!  Then when we stood atop Boa Vista, the wind blew so strongly that the smallest of us said afterwards she thought she was going to get blown off that 260-meter-high hill -- and I swear that after I put my backpack down on the ground, I saw it being moved by the gusts of wind we encountered up on that exposed hilltop!

Despite the strong winds that we encountered while up there, my friends and I were in agreement that being atop Boa Vista, from where commanding panoramic views are to be had, was the highpoint of today's hike.  And because the trail up the hill isn't signposted (like with High West, another Hong Kong Island hill from atop which stupendous views also are to be had), there's the bonus of feeling like you've been let in on a wonderful secret when you find out about it!

Incidentally, I learnt today that the Chinese name of Boa Vista (which means "Good View" in Portuguese) translates into English as "wild boar trail" and am moved to wonder whether the person who did the translating heard "boar" instead of "boa" when told the hill's "English" name!  If so, this might explain why so few people think of going up Boa Vista and the section of unpaved trail on the southern side of Mount Parker that looks to have been given the same name as the nearby hill.

Of course another possibility is that the Chinese name for Boa Vista attests to it being a place where wild boars are to be found.  In which case I have to say that I'm really glad that we didn't spot any this afternoon -- because wild boars on top of strong winds would have made for a far too scary situation for me to deal with atop that hill! ;(
Posted by YTSL at 10:41 PM