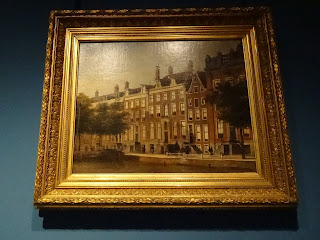 A painting of the canal house in which the second museum
I visited in Amsterdam is located, and its neighbors 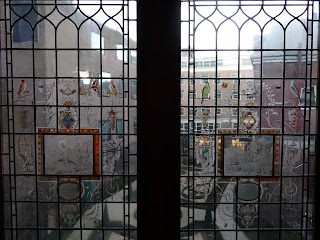 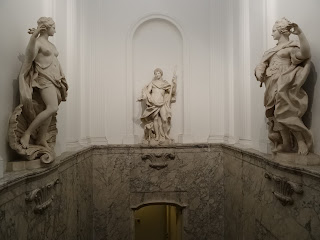 These statues of Roman goddesses adorn
the house's grand central staircase!
After the serious experience of visiting the Dutch Resistance Museum, I decided that some (relative) frivolity was in order.  So after a late lunch at the brasserie located just next door to the museum which I ended up spending slightly more than four hours in, I walked over to the historic house on Herengracht, considered to be the most important canal in Amsterdam and part of the city's UNESCO World Heritage-listed 17th century canal ring, which is home to the Museum Willet-Holthuysen.
Constructed in the late 17th century as a double canal house (i.e., one that's twice the size of the usual canal house built in the area), the edifice that houses the Museum Willet-Holthuysen was bequeathed to the city of Amsterdam, with the proviso that it'd be preserved and turned into a museum, in 1895 by Louisa Holthuysen.  The childless widow of Abraham Willet, she had inherited this house and its contents from her father in 1858, and had much of it redecorated after her marriage to Abraham Willet, an avid collector of arts and crafts like his wife.

A visit to the museum gives a good idea of how luxuriously prosperous Amsterdam residents of the 19th century were able to live.  One of three historical canal houses in the city whose original interiors are still visible, it reminded me of the 18th century Georgian House in Edinburgh New Town that I visited decades ago -- in that both these historic house museums were able to give an idea of the tastes of their long-gone owners as well as their class and times.
An only child with a liking of pet dogs into adulthood, Louisa Holthuysen collected paintings of animals as well as flowers.  Her collection is displayed along with her husband, who regularly held "art viewings" in a designated "club room" for his friends and turned a small room in the house into his personal mini-museum.  Also in their collection is a piece of furniture with a depiction of an East Asian woman in what was supposed to be a kimono, only since it was done by a European contemporary of theirs, doesn't look like any actual kimono I've seen!
At the time of my visit, some sections of the Museum Willet-Holthuysen were being worked on -- and I found myself wondering whether I should have gone instead to the Museum van Loon, which my Frommer's guidebook had described as having less contents than the Museum Willet-Holthuysen, or the Museum Geelvinck Hinlopen Huis, located on Keizersgracht like the Museum van Loon but whose existence my Frommer's guidebook hadn't mentioned!  But the die had been cast and I decided that seeing one historic Amsterdam canal house was enough -- especially since there's so much else to see in the Dutch capital that's home to more than 40 museums, among other things! ;b
Posted by YTSL at 11:28 PM