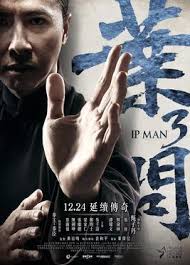 The Hong Kong poster for Ip Man 3
Ip Man 3 (Hong Kong-Mainland China, 2015)
- Wilson Yip, director
- Starring: Donnie Yen, Max Zhang Jin, Lynn Hung, Patrick Tam Yiu Man, Mike Tyson
In the year that's just passed, the Hong Kong box office increased its takings by 20 percent from the previous year -- but only had one local film in the top 10 list of box office hits.  And in keeping with this trend, pretty much all the movie talk I heard in the Big Lychee the week before I flew off to Amsterdam revolved around Star Wars: The Force Awakens, which had gone on general release here one day ahead of the USA (and on the same day as a bunch of other countries including South Korea, Britain and Malaysia).
Since returning from the Netherlands, however, about the only movie I've heard anyone I've mentioned has been Ip Man 3.  Released in Hong Kong cinemas on Christmas Eve (and due out in selected British cinemas on January 15th, and American ones on January 22nd), this blockbuster crowdpleaser is the long-awaited follow-up to the first two Ip Man movies directed by Wilson Yip and starring Donnie Yen.  Released in 2008 and 2010, these period martial arts dramas gave the wing chun master who was Bruce Lee's master the Wong Fei Hung and Fong Sai Yuk treatment: i.e., turned the renowned kung fu master into a legendary personality.
I don't think that I'll ever forget the first time I saw Donnie Yen burst into wing chun action in the first Ip Man.  He really was that breathtakingly impressive.  And although Ip Man 2 was a lesser film overall than the original offering, the son of another genuine martial arts great (Bow Sim Mark) continued to impress in his fight scenes, with those waged atop a rickety table in the 2010 movie also being able to hold their own in the pantheon of amazing martial arts battles in Hong Kong movies.
Yen electrifies once more in Ip Man 3's action scenes expertly choreographed by Yuen Woo Ping, including those which has him going up against Mike Tyson (yes, the former heavyweight box office champion!) as well as others.  But this time around, the Hong Kong movie veteran also is able to show off his acting chops -- particularly in some truly tender scenes shared with Lynn Hung, who plays Ip Man's beloved wife Wing Sing -- in a film that contains a significant amount of moving drama along with kinetic action.
In what may well be the final Ip Man movie for both the film's director and star, Wilson Yip appears intent on making a strong case for Ip Man having been a loving husband, caring father and pillar of the community as well as truly great martial arts practitioner.  Consequently, sub-plots in this film include one that relates to Wing Sing's well-being while the main story pertains to Ip Man going to the rescue after the future of the school attended by Ip Ching comes under threat when a shady American businessman (portrayed by Mike Tyson) covets its land and sends his goons (headed by an especially despicable character played by Patrick Tam Yiu Man) to do such as attack the headmaster (composer-character actor Tats Lau) and wreck the school's premises.
Taking place in Hong Kong, the action begins in 1959, with Ip Man firmly established in local martial arts circles, with a number of loyal students, and living comfortably with his wife and younger son Ip Ching (while his elder son by 12 years, Ip Chun, remained across the border in Mainland China).  Early on, a cocky young man known as Siu Lung (Little Dragon) to locals -- and Bruce Lee to much of the rest of the world -- is shown having his first meeting with Ip Man; one where the younger man is able to demonstrate that he has fast moves but Ip Man is able to establish that it's he who definitely is the master.
Those who've viewed and remember Herman Yau's Ip Man -- The Final Fight (2013) will immediately get a jarring feeling, like they've entered a parallel Ip Man universe, because of the markedly different presentation of certain details and developments in the real-life individual's life -- with Wilson Ip's film appearing to be less historically accurate than Herman Yau's.  The truth of the matter is that in, and with, all of his three Ip Man films, Wilson Yip seems far more intent on turning Ip Man into a movie legend than adhering to actual historical and biographical facts.
The director further shows his ambition by having both the film and its protagonist make socio-political statements.  Interestingly, those concerning "foreign elements" are done in such a way that even while they outwardly appear anti-Western, they can be "read" in such a way as to be, say, Mainlanders (much as anti-colonial criticism in pre-1997 Hong Kong movies could be seen in films ostensibly much more about Ming or Han vs Qing).
In any event, what's clear is that Ip Man 3 comes off best in its action scenes.  And while others (notably the impressive Max Zhang, playing another wing chun master, this one named Cheung Tin Chi) are sometimes given the showier, more fiery moves, it's beautiful to see how Yuen Woo Ping has ensured that it's Donnie Yen's Ip Man who is exemplary at utilizing wing chun's close combat principles when he fights.
In crucial ways like this, the Wilson Yip-Donnie Yen duo easily bests all those other director-star pairs that have brought Ip Man to the silver screen.  Anthony Wong Chau San may have had more gravitas as Ip Man in Herman Yau's 2013 film, Dennis To's Ip Man more erudite in the same director's 2010 The Legend is Born: Ip Man, and Tony Leung Chiu Wai's Ip Man looked stylish in action in Wong Kar Wai's The Grandmaster.  But there's little doubt that the wing chun sifu portrayed in Yip's films by Yen is the most convincing martial arts master of them all.

After reading this review, I look forward to seeing Ip Man 3.

From his first movie for Woo Ping, Drunken Tai Chi ('84), to Iron Monkey ('93), through the Wilson Yip collaborations - Donnie Yen has established himself as a dynamic presence in the pantheon of martial artists. Thanks for posting this review of his latest.

Hope you'll enjoy "Ip Man 3". And BTW, "Iron Monkey" is one of my favorite films in which Donnie Yen appears -- along with "Ip Man", and also "Wing Chun" and "Dragon Inn". ;b

Oh goody, YTSL, I'm relieved you enjoyed "Ip Man 3," too. I just saw the film tonight with my Asian film meetup group here in San Francisco, and I seem to be in the minority in my admiration for this entry in the series. More later, okay?

You don't happen to be the Lucy who used to live in Penang, are you? If so, shoot me an email! And either way, glad you saw and liked the movie.

Re those who didn't like "Ip Man 3": had they seen the other films in the series?

Yes, it's me! Will write more soon.

Yes, the people who didn't like this one *had* seen the other films in the series. Two of them thought the film dragged in places, that there was too much talk that got in the way of the action. (Two women!) One of the two said that when she wants to see a "weepy drama," she'll watch a weepy drama, but when she wants to see an action film, she's there solely for the action.

Those two and others thought that there were too many extraneous elements to the story, and that the narrative didn't hold together well.

I disagreed, but I pick my battles more selectively these days. There are so many to choose from! ; ) L

Woah and yay re it being you!! (BTW, in case you lost my email address, you can find it in the "About Me" page.)

Hmmm re those people you know who didn't like "Ip Man 3". It sounds like they aren't that familiar with Hong Kong movies. Otherwise, they'd know that mixing genres is part and parcel of Hong Kong cinema -- and one of the best things about it, to my mind! :)

Can't say how much this particular group of (mostly) Asian-American cinephiles knows or doesn't know about HK movies. However, I'll leave you with this Grady Hendrix quote about Ip Man 3:

"If you can’t have a good time at a movie featuring Mike Tyson speaking Cantonese, a Bruce Lee look-alike, and a bunch of Yuen Wo-ping fight scenes, then you probably can’t have fun."