Rallying for the missing booksellers and "One country, two systems" 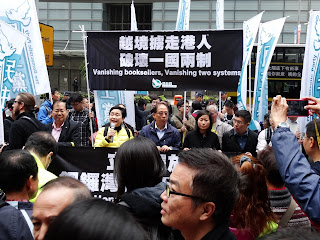 Concerned politicians and regular Hong Kongers gathered at
Admiralty's Tim Mei Avenue to rally for the missing booksellers
and "One country, two Systems" this afternoon 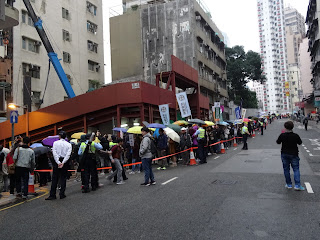 Thousands, some with umbrellas in hand, marched from Admiralty
to China's Liason Office in Hong Kong over in Sai Wan 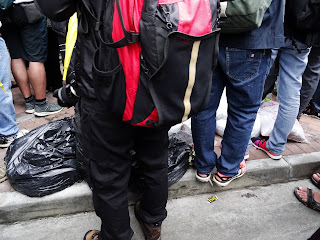 While waiting to officially lodge a protest at the Liason Office,
we had to stand in an area where garbage had been strewn --
something which gives a good idea of what some folks are willing to do
to make things uncomfortable for peaceful demonstrators


For many Hong Kongers, the key difference is that, unlike his four Causeway Bay Bookstore colleagues (whose disappearance he had sought to raise an alarm about), Lee appears to have been abducted in Hong Kong itself by individuals working for -- or who are a part of -- the Mainland Chinese authorities, and without the consent (or even knowledge) of their Hong Kong equivalents.  And if this is the case (which it very much looks like), the Mainland Chinese government has clearly violated the "One country, two systems" legal framework put in place after the 1997 Handover that's supposed to last for 50 years.


This afternoon, I took part in a rally protesting the disappearance of the five booksellers-publishers and the threat posed by the Mainland Chinese government to "One country, two systems".  Together with thousands of other people, we assembled within spitting distance of the still closed-off Civic Square and then made our way, in the kind of peaceful, orderly and civilized manner that has come to characterize Hong Kong political protests, to China's Liason Office in Hong Kong over in Sai Wan.
Among the more well known faces among the crowd were Democratic Party chairwoman Emily Lau, Scholarism student activist Agnes Chow, Southern District Councilor Paul Zimmerman and former Chief Secretary Anson Chan.  But by and large, the participants at today's protest looked to be ordinary Hong Kongers out to defend their city and the freedoms they enjoy (but which they are see as being increasingly threatened, notably by the Communist Chinese government).

Although there were times when the police, in the name of safety and security, temporarily halted sections of the march, it actually was pretty smooth going for the most part.  Thus it was that the section of the heavily policed protest that I was with -- which was within visual range of the march's "head", and which I gauged to be around 20 minutes ahead of the protest's "tail" -- was able to walk from Admiralty to Sai Wan in around two hours.

When we got close to the Liason Office, however, we encountered a foul stench -- literally.  Someone had strewn filled garbage bags in the area where the protesters gathered to wait for a Chinese government representative to come out from the imposing building to officially hear our demands for the immediate release of the five booksellers and the adherence to Hong Kong's Basic Law.

Maybe the message behind this dirty deed was that the protesters were/are trash.  But I am more inclined to interpret this action as showing that those responsible are truly scum --  who do not realize that Hong Kong people are far better than they seem to think, and consequently deserve better than has been the case, including the right to not have to live in fear of "the midnight knock on the door", and also the right to have the genuine universal suffrage that the Umbrella Movement made clear that many Hong Kongers want.
Posted by YTSL at 9:59 PM

Thank you for bringing attention to this with your blog.

Thank you for reading, and please help to spread awareness of what's been going on in Hong Kong.

Great metaphor at the end! Next time you can contact 1823 and tell them to remove the stench!

I've been following the story in the Western press so was happy to read about it from someone who is in Hong Kong.

What a good idea! It'd be interesting to see the response should I do so!

I've been happy to see so much coverage in the Western press (e.g., The Guardian, the BBC, CNN). Which was your source and has there been anything in the New York Times?

Yes, there was a big article in the NYT a few days ago. Photos too.

Without a military of its own, I sometimes think that Hong Kong's best defence against big powers like Communist China is the attention of the world. So getting international media coverage is helpful, to say the least.