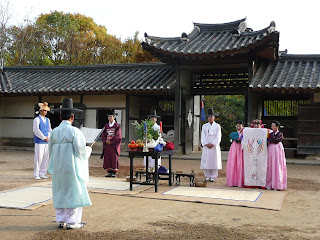 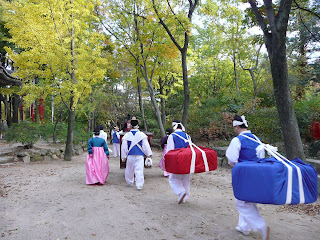 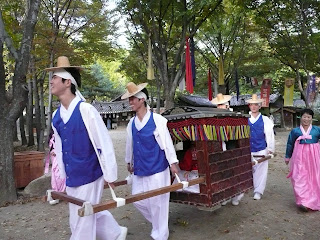 This time last week, I was on holiday and approximately 1,305 miles (or 2,100 kilometers) away from my computer. Hence my not taking part in a Photo Hunt for the first time in months, if not years.

Since returning from my Korean vacation, I've been sharing some of the tons of photos I took over the course of the trip. And for this week's Photo Hunt, what I've chosen to show are a trio of snaps taken at the Korean Folk Village in Yong-in City of a reenactment of a traditional Korean marriage.

In the top most photo, the bride (the woman being helped about by two others) and groom (the man in the maroon outfit) are shown in the process of tying the knot inside the compound of a large landowner's house. Knot tied, the groom proceeds to ride a horse at the head of a post-wedding entourage that includes a party that includes -- as can be seen in the middle photo -- men bearing large items tied to their backs.

And if you think that those items look heavy, what about what the poor men in the final picture -- whose head decorations (including white cloth tied around their heads) I found very novel -- have to carry? And although I can't speak Korean, I got the distinct feeling that as they passed by, at least one of them was joking aloud as to how very heavy the bride and her palanquin were! :D

These are fantastic shots and perfect for the theme. We were both missing photohunters for the first time in a long time last week, although I only traveled hundreds of miles not thousands. I just looked through some of your other photographs and it looks like you had a very interesting trip and got great shots.

Wow re your missing Photo Hunt last week too! And thanks for looking at my other Korean entries -- as I think you can gather from all of them, that country looks to be a shutter bug's dream. :)

Must be heavy from the guys' expression

Mine's up too As we tied the knot

oh beautiful snaps from your travel. clears the theme too.

(lol) your last sentence made me laugh out loud--i was thinking the same thing! these are wonderful shots...it's always interesting to see other culture's traditions.

Interesting culture and tradition of the Koreans. Theirs are quite similar to our Chinese culture.

I was reading your other posts, fascinating trip you had in Korean.

What a beautiful event and what gorgeous costumes! I also just got back from vacation and my Photo Hunt entry is one of the many photos we took!

Wow those are excellent photos YTSL! I hope you had a great holiday! Happy weekend

Wedding traditions are so varied around the world. Great way to illustrate the theme.

What on earth was in those huge bundles?! They looked as if they were enjoying themselves though!

Glad you enjoyed checking out this entry! :)

Yeah, am glad that I managed to continue my travel photos streak with this post. ;b

Hope you had a great vacation too! :)

Yes, had an excellent holiday. Really enjoyed myself and came back feeling really healthy! :)

Am not sure -- maybe the bride's dowry?

Love this....so educational as always with your posts. I learn so much from you.


My TIED is nautical this time...come by for a viewing if you can find time. Have a terrific Saturday!!!

Fascinating! Hope you had a nice vacation. These photos are very cool. I'm going to check out your other Korea posts too; I don't think I've ever known anyone who visited there.

Superb! And so interesting too. Could it be wedding presents on the men's backs? :)

Hahaha. Very cute photos. I love seeing other cultures' weddings. But the heavy thing is reminiscence of traditional chinese weddings. Haha. And the guys, being men, usually do complain. :P

I'll be heading to Korea this December too! Can't wait.

hope you enjoyed your vacation. great shots and thanks for the snippets of Korean culture.

Thanks for your enthusiasm and appreciation. It makes my day! :)

I had a wonderful vacation -- so much so that I'm thinking of visiting Korea again before too long. :)

Wedding presents sounds like a definite possibility! Put another way: your guess is as good as mine! ;b

Teeheehee re your remarks about men. Lemme guess: you're female, right? ;b

Yes, thanks and you're welcome. :b

Great shots for the theme.
You've brought back memories of when I visited the village - my photos are all of dancers and I don't remember seeing this, so thxs for sharing.

Hahaha ! you have the marriage and I have the carriage ! how nice we go together !

Beautiful and fascinating post! Glad you're back this week and that you've brought even more interesting things to share!

Great pictures for the theme! And the Koren marriage ceremony adds literal "tying the knot". I also enjoyed you other posts of Korea. The architectural detail is terrific.

What interesting shots!! clicked to enlarge them and I am glad I did.
What a great trip!

This is a great post for this week's theme. It is so different both in the interpretation of the theme and the subjects. I really enjoyed the pictures and look at the Korean culture. We had a short stop over in Seoul and had a chance to do a 5 hour tour. It was so interesting. I'm going to spend some time reading your previous posts to learn morn.

Looks like a wonderful holiday! Such great photos and memories.

Unique take on this theme!

Looks like they are trying to keep the bride from making a break for it.

Great photos. I love the way you share the world with us.

Wow - now that looks like a lot of work! And strain!

Your vacation looks like it was a lot of fun. Didn't know you were an expat but will have to read more and remember.. hehe

Ooo, you visited that same village too? Wow, if so -- as I know it's been around but even then, what a cool co-incidence! :)

Teehee re your seeing what I alluded to in my comments on your blog! :D

Thanks for appreciating -- this and my other posts. :)

Thanks for enjoying more than just this post. Hope you come back soon as I definitely plan to put up more posts of Korea soon. :)

Hope you enjoyed checking out my previous posts too and will come back for more. :)

Definitely re it having been the kind of holiday that has given me good photos and memories. :)

Hahahaha at your interpretation of what's going on with the bride! My own take was that they were thinking she was more fragile than she in fact was! :D

Yes, well, like I wrote in another post on this blog: I often get mistaken as a native in places where that's not the case! ;D

fascinating tradition, I wonder what they will be doing when they get to wherever they are going


ps, sorry, I haven't been commenting due to time constraint and slow internet connection. It's quite frustrating visiting blogs and not be able to see the images...sigh..

and yes, you are still on my blogroll and I will try to visit, I have not been doing photohunt at all, I can't seem to find the time for that but I do appreciate your visits, thank you

Missed you too last week.
But you are making up for it this week. Interesting photos as ever YTSL.

Good to know I'm still on your blogroll. Have to say that I had trouble seeing that though when I visited your blog! ;S

Thanks for continuing to visit. You've become one of the "long termers" now, I reckon! :)

Am glad you enjoyed seeing what you saw in this post. :)

Fascinating take on the theme.

Oh, I loved these photos, and your comments. Culturally fascinating and just aesthetically gorgeous.