The Rembrandt House Museum: yet another "must visit" Amsterdam museum for art lovers 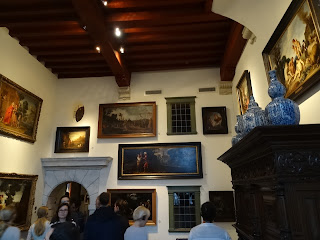 Amsterdam's Rembrandt House Museum is packed
with paintings and people! 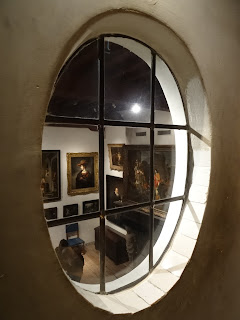 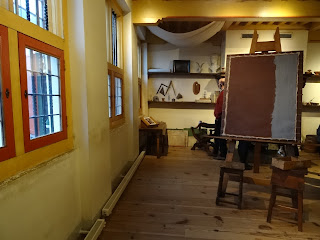 This very room in the house was Rembrandt's studio,
chosen because it had perfect lighting in his eyes!


A couple of days after my German friend and I spent many hours gazing at great art in the Rijkmuseum, including more than one masterpiece by Rembrandt von Rijn, the two of us -- together with my friend from America who I also met up with in Amsterdam -- went and checked out the Museum Het Rembrandthuis (Rembrandt House Museum) located in the very house that the Dutch Old Master had lived and worked between 1639 and 1658.


An elegant town house where Rembrandt painted, taught (he had several pupils and apprentices), and bought and sold artworks by others as well as himself, the 17th century structure looks like it'd be a most comfortable place to live and work in now as well as then.  However, it appeared to be an ill-fated place for the master artist: with his beloved first wife, Saskia, dying there in 1642; three of the four couple's four children not having managed to survive beyond their first two months of life; and Rembrandt becoming bankrupt and needing to move out of the house in 1658.


Much of the house has been restored to resemble how it would have been when Rembrandt lived there; making it easy to do such as imagine the artist working in the airy, bright room he specifically selected to be his studio.  Potential visitors should know though that the bulk of the artwork found at this museum actually are not Rembrandt's creations.  Instead, they are by his contemporaries -- and are the kind of works that he would have bought and sold as an art dealer.


Something else that struck me is that even while the Rembrandt is a highly respected artist whose works surely are world famous, the Rembrandt House Museum has a more "local" and "personal" feel to it than the considerably larger, much more well known and, frankly, distinctly commercial feeling Van Gogh Museum.  Put another way: I got the principal aim of the Rembrandt House Museum was to have its visitors learn (more) about Rembrandt's life and times (using such as free audio guides) but, in contrast, felt that the main goal of the Van Gogh Museum (inside whose galleries, more than incidentally, photography was not allowed) may be a toss up between ensuring that the institution stays profitable and showcasing the work of the Dutch post-Impressionist artist whose name it bears.

In conclusion: it's true that a visit to Amsterdam for the art lover won't feel complete without having visited the Van Gogh Museum which, after all, is home to such famous works as The Potato Eaters, Irises and one of my personal favorites of van Gogh's works, The Bedroom, and had a special exhibition while I was there on Edward Munch and van Gogh that looked at parallels in the two men's art and lives.  But the Rembrandt House Museum is significantly more atmospheric and consequently interesting in its own way.  And the Rijksmuseum absolutely cannot be beat in terms of sheer quantity but also quality of art works on display, and quality of curation too.
Posted by YTSL at 10:54 PM

I really enjoy visiting museums that are in the home of the person who painted the art work. It's a totally difference experience from visiting a more diverse museum. Second best for me is having a recreation of an artist's studio or writer's study/place of writing in a larger museum. Interactive is good...someone "forgot" to tell me that crawling around on the floor and up different levels at the Ghibli Museum was ONLY for KIDS! I thought the spaces were so small as I am a big foreigner...

I like visiting the homes of famous people whose work I respect and admire. I think my favorites of all time include non-artists such as Charles Darwin and Isak Dinesen (AKA Karen Blixen)...

Re the Ghibli Museum: I think you're allowed to crawl around, etc. there. The only thing I know that we adults aren't allowed to do is to go into that room with the catbus *Sob*!