A by-the-numbers look at my 2015 movie viewing year 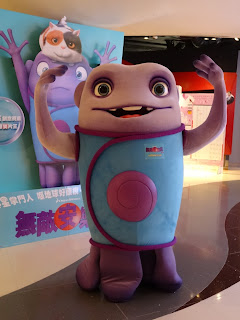 The main character in Home, one of a number
of animated Hollywood movies I viewed in 2015 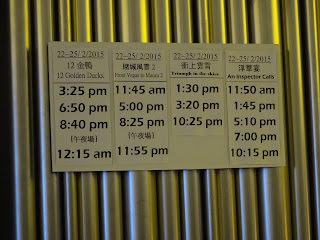 
At various points in my life, I've had jobs which -- I'd tell people -- had me "watching lots of bad films so that you don't have to".  A few months into 2015, I decided that I had spent too many hours of my life watching movies I didn't really want to.  Since then, there have been weeks when I've not watched a single movie.

2 -- The total number of films I viewed in 2015 from countries that no longer exist (i.e., East Germany and the USSR)


3 -- The number of times I got to see my favorite actress of all time, Brigitte Lin Ching-Hsia, on a big screen in 2015 (For the record, she starred in The Bride with White Hair, which screened at the 2015 Hong Kong International Film Festival, and Swordsman II, one of the selections for the Hong Kong Film Archive's "100 Must See Hong Kong Movies" series, and features briefly in 2014 Taiwanese documentary The Moment!)


33 -- The total number of Hong Kong feature films (including co-productions with Mainland China and other countries, and one unfunished work) and short film anthologies that I viewed for the first time in 2015

1934 -- The original year of release of It Happened One Night, the Hollywod classic that was the oldest movie I viewed in 2015

Speaking of movies on a plane: I got lucky on the flight back to London and saw Veteran and Assassination. (Also watched To the Fore and Unbeatable.)

I should fly Cathay more often :)

anyway, have a wonderful new year.

My favorite part of your yearly movie watching blog entry is the list of films that you rate 8.5 and higher on the burns.com scale. Of course I don't watch all of them but I do look for the ones that are available to me.

Cathay Pacific does have a good movie selection. Lufthansa's wasn't too bad either! Along with the usual Western options, they also had Bollywood, Japanese and Chinese language options on the long haul flights between Hong Kong and Amsterdam, with offerings including "Monster Hunt", "I Am Somebody" and "Undercover Duet"!

Before anything else: what are the odds of two readers named Lissa commenting on the same blog post? ;b

I hope that 8.5 and higher on the brns.com scale list does help you find some good movies to watch. BTW, here's letting you know that I'll probably add "Ip Man 3" (which opened late last year in Hong Kong but which I just saw today) to my 2016 list... ;b