Musings after a visit to the Anne Frank House 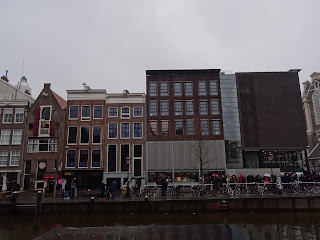 If not for the long lines outside the new building erected
next to it and a small metal plaque next to the front door,
you'd not know which was the Anne Frank House 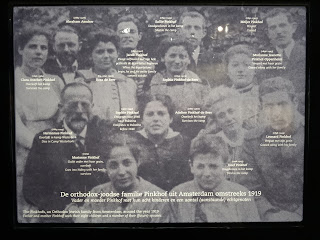 This photo in the Dutch Resistance Museum shows how common
was the fate that befell Anne Frank in the Amsterdam Jewish
community during the Second World War
When I was 13 years old, I found a book called The Diary of Anne Frank in my school library in Penang.  I think it was the first book written by a fellow non-adult that I had ever read and, as a result, it spoke to me more than other books about life during World War II would have had at the time.

I've not re-read The Diary of Anne Frank since I returned that copy of the book to my school library.  But I have not forgotten about it.  I can't quote exact lines from it but I do remember that Anne Frank was the same age that I then was when she first began writing her diary, and when she and her family went into hiding in rooms on the upper floor of the building which housed her father, Otto Frank's company.  And I also can recall finding out that she had died when she was just 15 years of age, at Bergen-Belsen, one of the many Nazi concentration camps where millions of innocent people were killed.
After the second world war, the building on Prinsengracht which had housed the secret annex where Anne Frank, her sister, her parents, and four other people had hid was slated for demolition.  Saved from that fate, it was turned into a museum about the life and times of Anne Frank, one which was simultaneously special but also has many shared elements with many others.
More than once in the Anne Frank House, its visitors are told that Anne Frank was no angel but, rather, a regular girl whose tragic fate was shared by many other girls and people.  Indeed, among the exhibits in the museum are official records showing that on the day that "our" Anne Frank arrived at Auschwitz, the first concentration camp in which she was incarcerated, four females named Anne Frank were admitted there.
One big reason why we know of the Anne Frank who was the daughter of Otto Frank is that her father survived the Holocaust (the only one of those who had hid in "the secret annex" to do so), returned to Amsterdam after the war, was given his younger daughter's diary by a friend who had saved Anne Frank's scribblings, and was able to arrange for the publication of a work that has gone on to be read by millions, in the original Dutch and over 60 other languages.

Anne Frank aspired to be a journalist.  In view of her love of the movies (apparent in her diary and the pictures of star actors and actresses she cut out of magazines and remain pasted on the walls of the room she shared with a family friend in the secret annex), maybe she would have gone into the film business if she had lived.  Instead, she never lived to become adult.  She never got to do so many things she wanted to do, and which she would have seemed completely capable of doing if her life had been allowed to be as normal as the girl she appeared to have been.

Amazingly though, this particular Jewish victim of the Nazis -- who was unable to live long enough to see her 16th birthday -- has managed over the years to educate and inspire so many people, in so many parts of the world.  Among other things, she inspires us to think well of others (this via such as her writing in her diary that, "In spite of everything, I still believe people are good at heart"), and also to live well.  Also, as Emma Thompson has said of Anne Frank: "All her would-haves are our possibilities".  Hearing this near the conclusion of the tour through the Anne Frank House, one can't but take this message to heart.
Posted by YTSL at 8:27 PM

Hi YTSL -- Thanks for writing about your visit to the Anne Frank House. I went there over 25 years ago and am still haunted by that room with pictures of Hollywood stars on the walls, thinking this was where she used to live and dream...

I didn't know you had been to the Anne Frank House -- and over 25 years ago! It's amazing that you're still haunted by what you saw in the room in the Secret Annex where Anne Frank had spent much of her days and nights. I think seeing many of those pictures really hammered home how bizarre it was that someone like her would get relegated to the terrible fate that the Nazis meted out on her (and so many other people like her).