Historic hofjes in Amsterdam and beyond 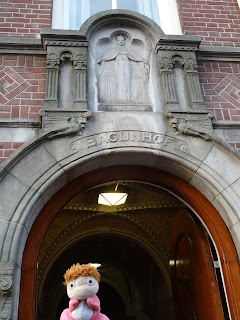 Puppet Ponyo poses at the entrance to the Beginjhof,
built as a hofje for beguines (devout women) 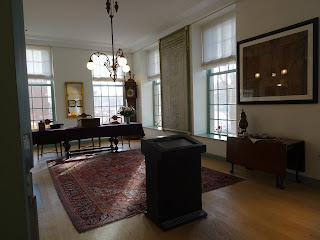 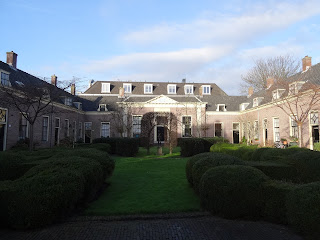 The serene buildings of another hofje -- this one
located in Haarlem


On the same day that my German friend and I visited Amsterdam's royal palace, the two of us and my American friend also went and checked out the Beginjhof located just a few minutes' walk away.  An enclosed courtyard with some buildings dating back to the 14th century, it was a sanctuary for a Catholic sisterhood whose members lived like nuns even though they didn't take up those specific religious vows.

The 47 buildings that surround the courtyard are still occupied by single women, many of them elderly -- and there are signs requesting that visitors be quiet and refrain from taking photos while in the locale (which also includes a "hidden church" and an English Reformed Church which has been in existence since 1607).  Unfortunately, few of the visitors -- the majority of whom appeared to be European (rather than misbehaving Mainland Chinese tourists!) -- that were there when my two friends and I were in the area actually complied with those requests.


So while I can imagine that the Beginjhof could be a serene place during those times of the day when it's closed to the public, I get the impression that its residents have had to reconcile themselves to their residential area not being as much of an oasis of calm in the city as they'd like during those times when that inner court area is open to the public.  I guess this is the not entirely unexpected downside of living in very pleasant historic buildings located in the heart of a city which attracts millions of tourists annually.  Still, what a pity that it has had to come to this!


As it so happens, the day before we visited the Beginjhof, my American friend and I also had gotten acccess into the buildings of another former Amsterdam hofje.  Established in the 17th century to provide shelter for 400 needy women, the Amstelhof (or Deanery Home for Old Women) is now home to the Dutch branch of Russia's Hermitage; and it was to that museum that my friend and I had gone to see the impressive Spanish Masters from the Golden Age: The World of El Greco, Ribero, Zurbaran, Velazquez, Murillo and Goya special exhibition which runs there through to May of this year.

Much of the former Amstelhof has been converted into exhibition halls and other spaces for the use of the Hermitage Amsterdam.  But a few rooms remain that serve as reminders of the buildings' former history as an almshouse, including a large hall where the residents attended church services but also had their meals, a kitchen located in the cellar restored to give an idea of what it was like in the 18th century, and the office of the governess (i.e., female head of the Amstelhof).

A few days later, when my German friend and I visited the nearby city of Haarlem, we came across another couple of hofjes.  My Frommer's guidebook states that "Amsterdam has many secret courtyards surrounded by almshouses".  But to judge from what we saw in Haarlem, there appear to be a number of hofjes that are installed in far less secret locations in the Netherlands than the Beginjhof which I reckon lots of people would overlook or be unable to locate if not for the sign posts directing visitors to it!
Posted by YTSL at 11:27 PM