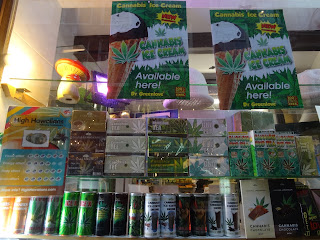 There are lots of drugs legally on offer in Amsterdam... 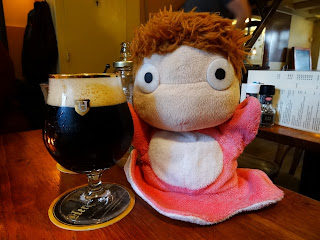 ...but Puppet Ponyo and I opted to spend more time in
brown cafes and other bars, rather than coffeeshops 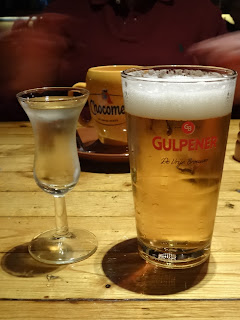 In particular, I very much enjoyed drinking
jenever as well as beer in The Netherlands :)


"Are you going to try taking marijuana?"  That was the question more than one person asked me after I told them that I'd be heading over to Amsterdam in December.  My honest answer to those wondering is: no, truly!  I must admit that there's a part of me that was tempted but, as weird as it sounds, I find the smell of marijuana terribly off-puttingly sweet as well as strong.

Also, I worry about the effects that the drug has on me; given that I've heard that some people cry when they're high as well as marijuana failing to have an effect on some people rather than getting them all mellow and giggly, like in the ideal case.  In addition, it's really not like this would have been my first chance to try marijuana, given that -- among other things -- I attended a seriously "granola" liberal arts college in the US; and I will state for the record that I've attended a pot party (though I didn't necessarily inhale during it) in my sophomore year at college!

So, rather than aim to visit an Amsterdam coffeeshop, one of my goals when visiting The Netherlands' capital city was to spend some time hanging out in a "brown cafe" -- where coffee, not marijuana, is served but, also, more potent stuff such as all manner of alcoholic libations!  And an old "brown cafe" -- in particular, Cafe Hoppe, which has been in operation since 1670 -- was the very first place that I headed too after checking in and dropping my luggage at the Amsterdam hotel where I ended up spending the better part of a fortnight!

The Dutch equivalent of a British pub or Japanese izakaya, "brown cafes" serve food as well as drink, and can be general mellow affairs outside of peak hours even while bustling and bursting at the seams at peak times.  The first time I visited Cafe Hoppe, I found only a Dutch language menu and, after recognizing the Dutch word for cheese (kaas), opted for a plate of that along with a glass of Belgian beer on tap.  On successive visits, however, I got bolder; with my ordering an ossenworst (a smoked raw beef sausage which I found delicoiusly addictive!) sandwich to eat on my second visit; and a plate of blakerverworst (AKA liverwurst, or blood sausage) on my third visit, for what would be my final meal in Amsterdam before I headed over to the aiport!

In addition to getting more daring in terms of what I ordered to eat, I also decided to "go for it" and try some jenever while I was in the Netherlands -- and found that I absolutely loved the drink, be it 15% or up to 40% alcohol, jonge (young, tasting like a lighter version of gin), oude (old, with whisky notes) or korenjwin (corn wine, and tasting somewhat brandy-ish) -- though I do draw the line with regards to those jenever which have blended -- diluted? -- with fruit (such as various types of berries or lemon)!

More than once, I also opted for kopstoot, as per the traditional order in Amsterdam.  Although this translates into English as "(a) blow to your head", it really wasn't that bad -- perhaps because I made sure that when I ordered this combination, my beer of choice was a pilsner that was lower in alcohol than the higher alcohol beers that are often available in Amsterdam bars (be they brewed in the Belgian, German and British styles)!

Something that also undoubtedly helped is that I drank both those drinks slowly, rather than chugged them the way that, say, an American college fraternity "brother" would do so.  And while there are some who think that this makes it seem that I "drink like an old man", as one friend as put it, it does tend to (generally) ensure that I thankfully don't have a hangover and am not the worse for wear the next day! ;b
Posted by YTSL at 11:59 PM

Hahahaaa I never took marijuana either. It just doesn't appeal to me (I'm a smoker so my poison is nicotine - which is probably more harmful) Everyone thought it was weird that I didn't even get mushrooms or ate any brownies but I like the city so much that I wanted to enjoy it sober the both times. I have had a few beers (and I loved the fact that you can have them in movie theaters) but that was about it. I was high on culture - heh.

My new travel shiny is USA and since it is not that far from where I live, I constantly think that I'll visit some other time.But reading your post made me miss the city.

Ah, blood sausages...... This is sort of an uncommon item here in Hong Kong. Very rare. I have only tasted a few slices in the mid 1980s when a colleague brought some back from Germany. The outbreak of Mad Cow Disease brought this to a further decline locally.

As far as I could recall it is dark in colour and is quite delicious. Taste is sort of heavy. Liver/kidney/pig blood/chicken blood eaters shouldn't have much problem consuming blood sausages.

On the other hand, I have seen on TLC that some Spaniard chefs made similar stuffs after butchering a calf in a cookery documentary. The messy part was the butchering, which was not fully shown on screen. The sausage making part was not that messy. Some might see it horrible if one sees the small bucket of blood. I don't see anything horrible though.

Smoked raw beef? Is it something like the Italians do (mix with olive oil before consuming) or did you just put it into your mouth?

Any luck with Brussels sprouts there? It is the winter crop of the season of the region.

A friend who's taken marijuana told me he felt out of it for a day and I did feel that it'd be a waste to do and be that in Amsterdam. Honestly though, I really do dislike the smell. It's so strong and sickly sweet!

And watch out for more posts re Amsterdam on my blog in the near future... ;b

The blood sausage I had in Amsterdam was liverwurst/gray colored. Re blood sausages in Hong Kong: you can have blood pudding with your English breakfast at places likes Dickens and the Flying Pan! ;b

As for the Dutch smoked raw beef: it looks like salami, is served in a patty like hamburgers but I guess would be best likened to steak tartare, only with less spices mixed into it.

And no, I didn't get served any Brussels sprouts in Amsterdam -- more's the pity! ;S

Great to read about your most recent vacation adventure, transmitted via the blogosphere. Glad you brought along your veteran plushie travel companion, whom I've gotten into the habit of referring to as the Endearing One. This most extraordinary of plushies would look equally at home whether posing with a beer in a bar, or posing for a photo by a canal, or even viewing Dutch old master paintings in a museum.

Reading this Amsterdam entry, I recalled a humorous experience I had as a youthful traveler years ago in Amsterdam. A man approached me on the street and asked me if I'd like to buy some cannabis. I agreed and purchased a small amount in a matchbox. I inspected it without smelling it. When I got back to my hotel room and smelled it, I realized I had been ripped-off: the man had sold me oregano! Welcome to Amsterdam!

How lovely of you to refer to Puppet Ponyo as the Endearing One! If she weren't already pink, she'd turn that color at the compliment!

And thanks for sharing your Amsterdam oregano story. Hope you didn't pay too much for it! :D

"Bottoms up" to Puppet Ponyo. Looks like she was enjoying herself.

Puppet Ponyo does appear to enjoy our holidays -- and I have to say that I really do enjoy her companionship during my trips out of Hong Kong! :)