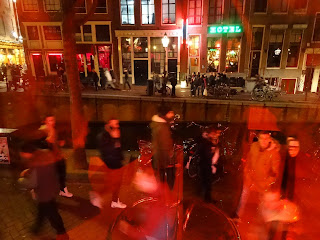 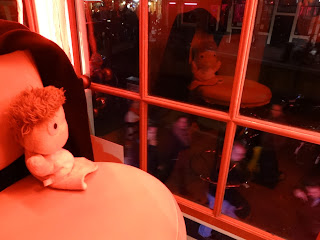 Passersby gawk at an impassive Puppet Ponyo sitting
on display in the center De Wallen! :O 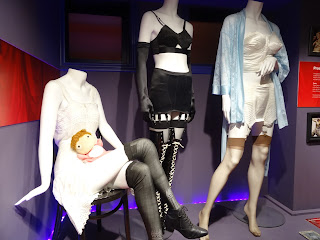 Puppet Ponyo also posed in the museum with
some dummies attired in costumes favored by prostitutes of old ;b

Along with enquiring if I planned to sample some marijuana when I went to Amsterdam, more than one person asked me if I was going to head over to at least one of the Dutch capital's Red Light Districts.  In all honesty: if I had been in Amsterdam by myself, I would not have done so; this not least because, well, it's not like I hadn't already seen plenty of prostitutes in Hong Kong, Macau, Tanzania and elsewhere over the years (and yes, if enough people ask, I may write a blog entry about these experiences at some point)!


However, I ended up going to Amsterdam's main Red Light District over in De Wallen three times during my approximately two week stay in the Netherlands because -- I swear! -- I was with people who wanted to go and see what it's like over there.


The first time I went there (with my German friend!), it was Christmas Eve and the area was on the quiet side.  Indeed, we spotted just one sex worker on show in one of the Red Light District's famous window brothels -- and, at the risk of sounding "lookist", the female in question was not someone I think most people would consider all that attractive looking!


The day after Christmas, my German friend and I returned to De Wallen after having dinner (and drinks) at the nearby Restaurant-Cafe In de Waag, housed in a 15th century building that had served as one of Amsterdam's city gates.  This time around, the area was much livelier and more colorful.  And not content with just strolling about in the streets and alleys, my German friend and I decided to get a promised "behind the scenes" look at goings-on in the Red Light District courtesy of the Red Light Secrets: Museum of Prostitution located smack-dab in the middle of the district.


A very different museological establishment in many ways from the other, more conventional museological institutions I visited during my Netherlands trip, Red Light Secrets: Museum of Prostitution has displays which may titillate and amuse but also others which are on the serious and sobering side.  And like many of the other museums I visited in the Netherlands, it makes use of multimedia along with more conventional displays -- with the first room we walked into showing a film about life in De Wallen (which is home to fairly "regular" clothing shops, laundries, cafes and bars, etc. as well as brothels and "coffeeshops") and the next room in that we entered containing a more static, "low tech" display of  prostitute attire over the ages.


Probably the most eye-catching of the museum's rooms is one where visitors are on public display in a room done up -- with large windows and red lighting, filled with music to dance by, etc. -- like those where the Red Light District's sex workers ply their wares.  But most interesting for me, and also quite unsettling, was a space inside the museum which allowed one to get a vividly good sense of what and how it really is like to be the subject of long, at times unnervingly scary stares, super blunt queries and lewd, debasing remarks.

To judge from such as the speed that various men and women walked through the rooms of the museum, my feeling is that Red Light Secrets: Museum of Prostitution may actually be more of interest to females, even while more males may be attracted to visit it.  Upon thinking more about this, I reckon that it makes quite a bit of sense as the goal of this establishment is to get folks to give prostitutes (more) respect: not for their sexual prowess; but for their being women doing a demanding job that -- as can be seen by it being known as "the world's oldest profession" -- is one of whose services are much sought after, even required.
Posted by YTSL at 6:21 PM

From the Rijksmuseum to the Red Light District - you certainly explored the variety of Amsterdam's culture. Since prostitution is a social reality, a museum about this profession would be relevant. Looking at these costumes, it isn't hard to imagine the women who might have wore clothes like these and what their personal lives might have been like.

A unique photo of Puppet Ponyo sitting inside a window, looking out at the people on the street! She may appear "impassive" in one of her poses, but I wonder if this world traveler is actually observing and absorbing all that she sees in her travels. And, at least in my imagination, this is all part of her mystique!

I definitely did explore quite the variety Amsterdam's culture -- and a range of museums in that city (and more)! BTW, I sent that photo of Puppet Ponyo to one of my friends a few weeks ago and he commented that even though 2016 is still very young, he wouldn't be surprised if that's the most unusual photo he gets sent this year! ;D